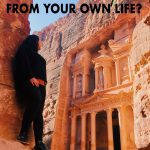 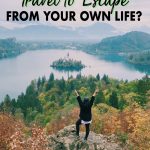 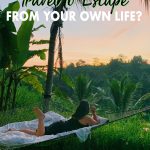 If you had asked me in early 2019 if I was using travel to escape from my own life, I would have laughed in your face and told you no. The fact that anyone could even think that travel was used solely to escape was to me, at that time, completely wrong.

Travel, I believed, is what you grew from. Travelling is was taught you so much about the world, it allowed you to meet new people, mingle in cultures you would never get the chance to at home. Travel was all the things the cliche quotes wrote about.

“The world is a book and those who do not travel read only one page. ” – Saint Augustine

“Travel makes one modest, you see what a tiny place you occupy in the world.” – Gustave Flaubert

“Travelling – it leaves you speechless, then turns you into a storyteller.” – Ibn Battuta

I could go on, but you get the gist. You’ve seen all the quotes, plastered on coffee mugs, on doormats, as posters and so on.

Travel is painted as this extraordinary event that will change you, which I do believe it can help do, but I also believe that a lot of people are using travel for the wrong reason and that is to escape.

I’m not here to say that everyone uses travel as a form of escapism, but I strongly believe the majority of people do. Even I, a full-time travel blogger, was using travel to escape.

I ran away from so much, I used travel as my identity and I used it as an excuse to not get to know myself, to not settle down, to not deal with real-life issues.

Truthfully, all of 2019 I felt like a complete fraud for sharing my beautiful travel pictures when really I was waking up in beautiful Italian cities to only want to go back to sleep so I could pass the day quicker.

I felt guilty for sharing beautiful pictures of Morocco, glamorizing the country when really it’s my least favourite in the world.

I felt like I had to continue snapping pictures in Granada because that’s what people knew me for, even though I struggled with loneliness every single day.

I was burnt out, unfulfilled, struggling with an identity crisis and couldn’t tell you what was wrong other than I had it all (mostly) but was somehow deeply unhappy.

I got really good at smiling on cue, looking as if I was having the time of my life in every Instagram picture you see and could pull myself together enough to nail 10 second Instagram story clips to detail my days visiting palaces, exploring deserts and eating local delicacies.

My Instagram was a place where I felt like I had to keep up my image despite not even knowing what my image was anymore.

It was a place where people thought they knew me but in reality, they knew nothing because I spent all of 2019 having no idea who I even was.

Now I’m able to look back and realize how much I was using travel as a form of escapism.

I never realized that I was running from anything until I stopped long enough to breathe, long enough to listen to myself, long enough to recognize that catching flights instead of feelings (my own feelings) was actually hurting me more than it was helping me.

I know that a lot of you are travel lovers and know that I so appreciate you continuing to follow my journey despite its sharp turn but what I hope for all of you is that you are able to look past what’s on the surface, the beautiful destinations, and get curious about your own journeys.

I encourage you to ask yourself if you’re using travel for escapism or expansion?

Are you following travel influencers to be inspired by their personal, inner journey or for the footprints they’re making on paths that are typically very well beaten?

I really struggled and still sometimes do to share what 2019 was for me as I came to terms with what travel really is for me (and what I believe it is for a lot of people, most travel bloggers included), a form of escapism.

Any travel pictures I share in the future will be just that, pictures, but I swear to never ask whether you prefer cities or nature or mountains or the ocean ever again.

I’m so over how shallow the travel industry is. Let’s dive a little deeper, shall we?

But what’s the difference between escapism and expansion? Escapism is using travel to “get away from it all.” It’s to believe that just taking a break from your life will solve any of your issues. It’s the belief that travel is some magical thing that makes life easier or worth living for.

Expansion, on the other hand, is growing as you travel. It’s using travel to truly connect, to Mother Earth, to yourself, to others. And I don’t mean just sharing drinks with people you met in a hostel.

Travelling these days is all about country counting, seeing as much as possible in a short timeframe, holidays just to get away and ticking off bucket lists. And while I don’t see there is much harm in doing so sometimes, I encourage you to not get trapped in it.

I encourage you to constantly ask yourself if you’re travelling for escapism or expansion. Which one feels better to you? Which one will allow you to grow the most? Which one will truly give you a sense of freedom and add to your life?

It’s up to you to decide how you want to see the world, but don’t do it at the expense of not seeing yourself for who you truly are because that is the greatest gift and your most powerful tool of all.