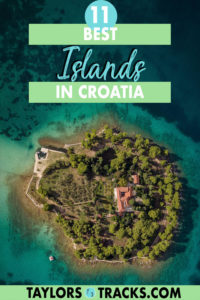 With over 700 islands in Croatia that stretch down Croatia’s lengthy coast, it takes a bit of knowledge to know which Croatian islands to visit, and which are worthy of your vacation time. But never fear dear reader, as this guide highlights the best islands in Croatia for all.

From north to south, for party lovers to family-friendly, with this Croatia island guide you’ll be able to decide where’s best for you to visit and add to your Croatia itinerary. As magical and beautiful as these islands are it is important to note the best time to travel to Croatia for island hopping specifically as many shut down during the winter months so avoid disappointment!

Love scenery? Visit any of these islands. What about wine? Or nature? History? Sandy beaches? There’s plenty of options for you too. These are the best Croatian islands for all visitors for island hopping or even as day trips from major cities. 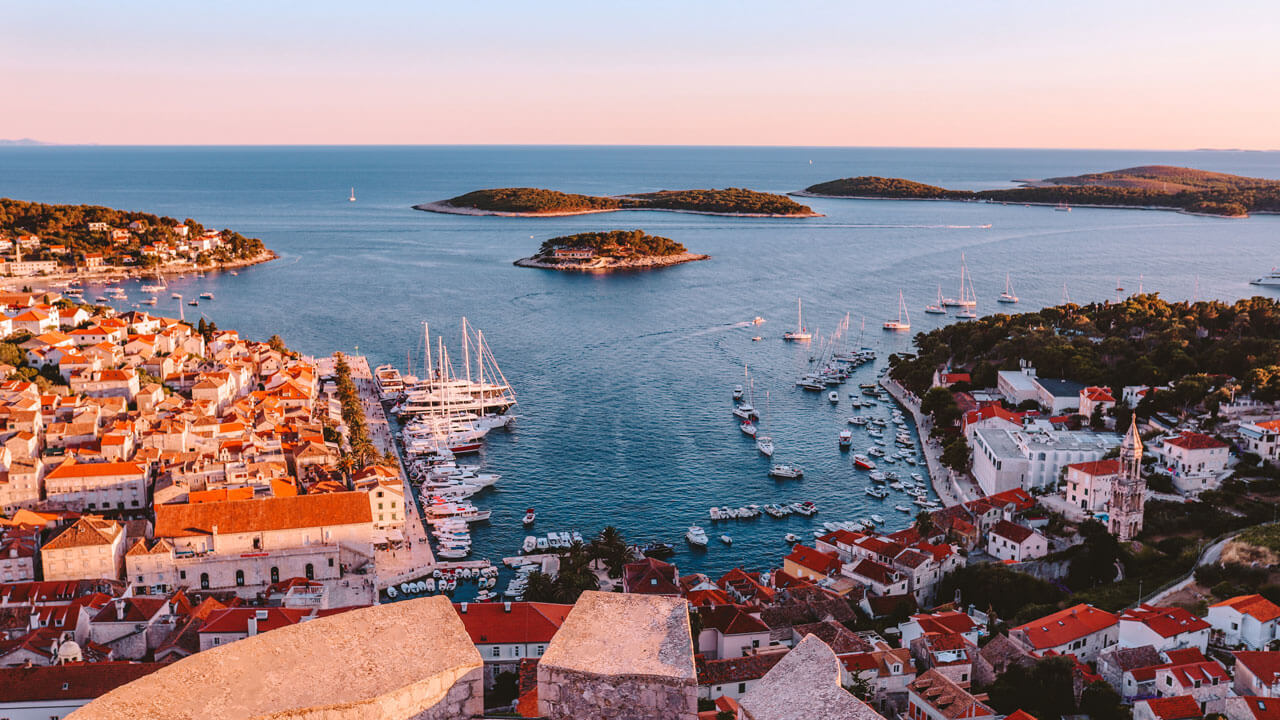 Hvar is likely one of the first islands that you’ll of heard of in Croatia and for good reason! This Croatian island isn’t just popular for tourists like you and I but for celebrities too. Hvar may be known as a party island, but don’t let that fool you. You’ll find an abundance of nightlife in the town of Hvar but take some time to explore across the island and you’ll find a number of quieter towns that are great for families such as Stari Grad and Jelsa.

When you visit Hvar be sure to venture further than Hvar Town because there are plenty of things to do in Hvar beyond the town (though the town is definitely worth exploring too). I recommend renting a scooter and making your way to beaches, towns, or take a day trip by boat to Pakleni Islands. 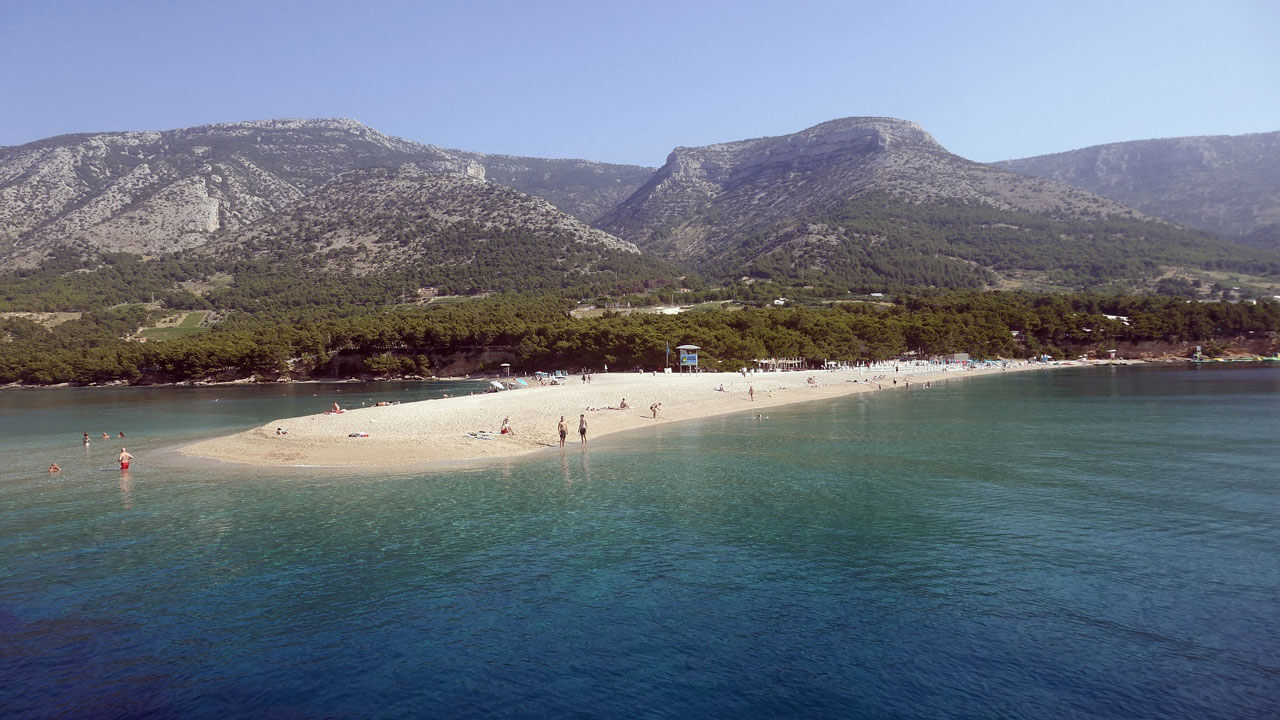 Ideal as a day trip or somewhere to spend a few days, Brac is an island that is easily accessible from Croatia’s second-largest city, Split or Makarska. This large island is home to the famous Zlatni Rat Beach, said to be the most beautiful beach in Croatia and even Europe. The Vidova Gora Mountain lookout is one of the best things to do in Brac that offers stellar views over Zlatni Rat Beach and over Hvar, the neighbouring island.

Bol and Supetar are the most popular towns on the island, both of which offer a place for water sports, boutique shopping, and great food. Don’t miss trying some of the island’s olive oil or wine!

The island of Korcula can’t be passed when visiting the island between Split and Dubrovnik. As a personal favourite island of mine and beloved by many others, this small island that isn’t a far boat trip from Dubrovnik. Korcula is a great island that will have you out exploring the beauty of the island by foot, boat, or bike. The main town goes by the same name as the island and is a charming old town that is said to be the birthplace of Marco Polo (though you may have some people debating that!).

Korcula is also known for its wine and it’s popular for visitors to bike around the island and to the island’s largest town, Vela Luka, to taste the local grapes. Aside from history, charming streets filled with shops, and wine, one of the top things to do in Korcula is to rent a boat and see the island from the water as the view is spectacular. 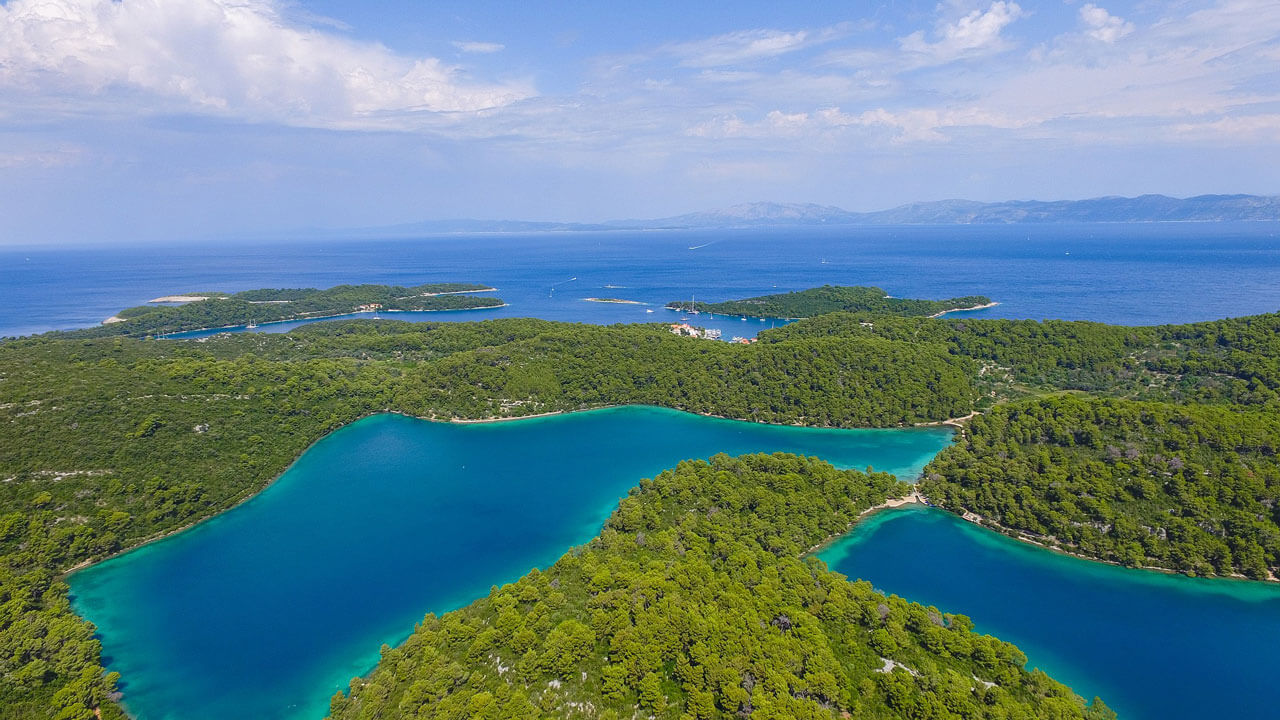 Nature lovers take note, this small island has a national park that covers a third of the island. Ideal as a day trip from Korcula, Mljet is covered with paths that you can walk and bike to scenic bays with few people. Or there’s always the option to rent a kayak and spend some time in the stunningly blue Adriatic Waters. 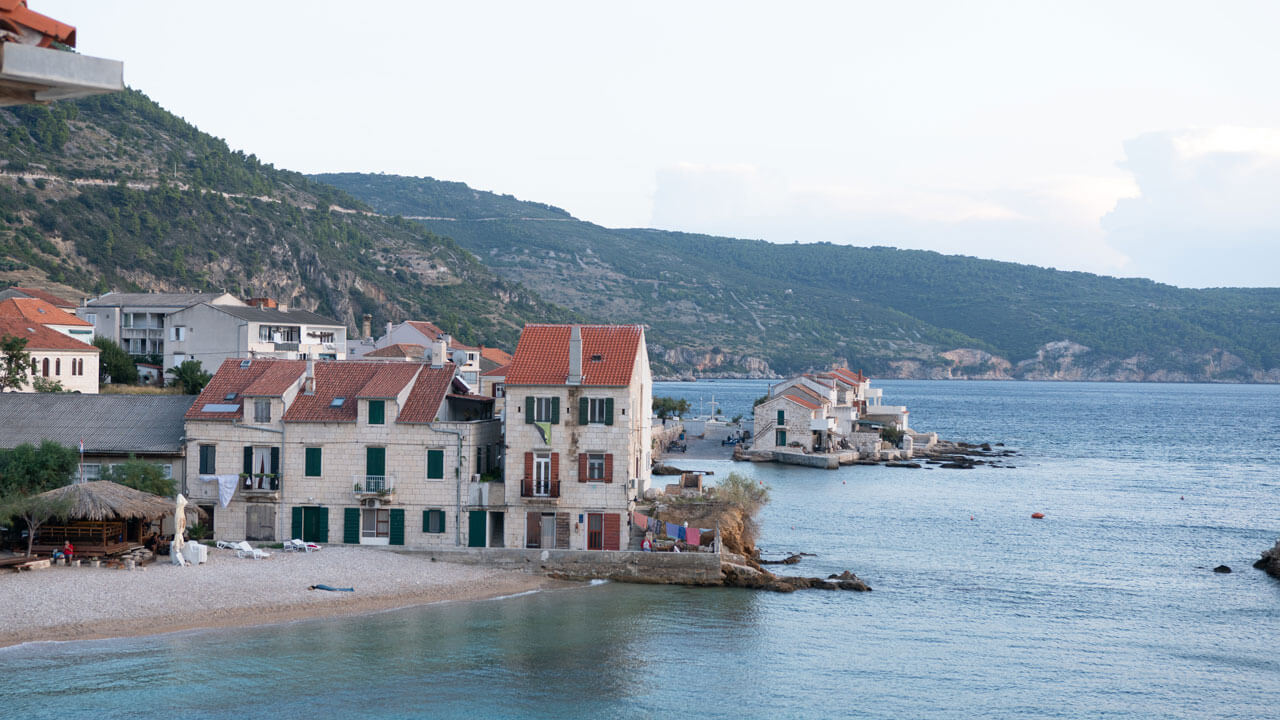 Often referred to as ‘The Mediterranean as it once was’, Vis is an interesting look into the past as the island has remained mostly as it was in the 1950s. Visitors come here for wine, history, nature, and for the beaches that you’ll have a high chance of having to yourself. This island was also where Mama Mia 2 was filmed so if you’ve seen the beauty in the film then you know that you’re in for a treat. 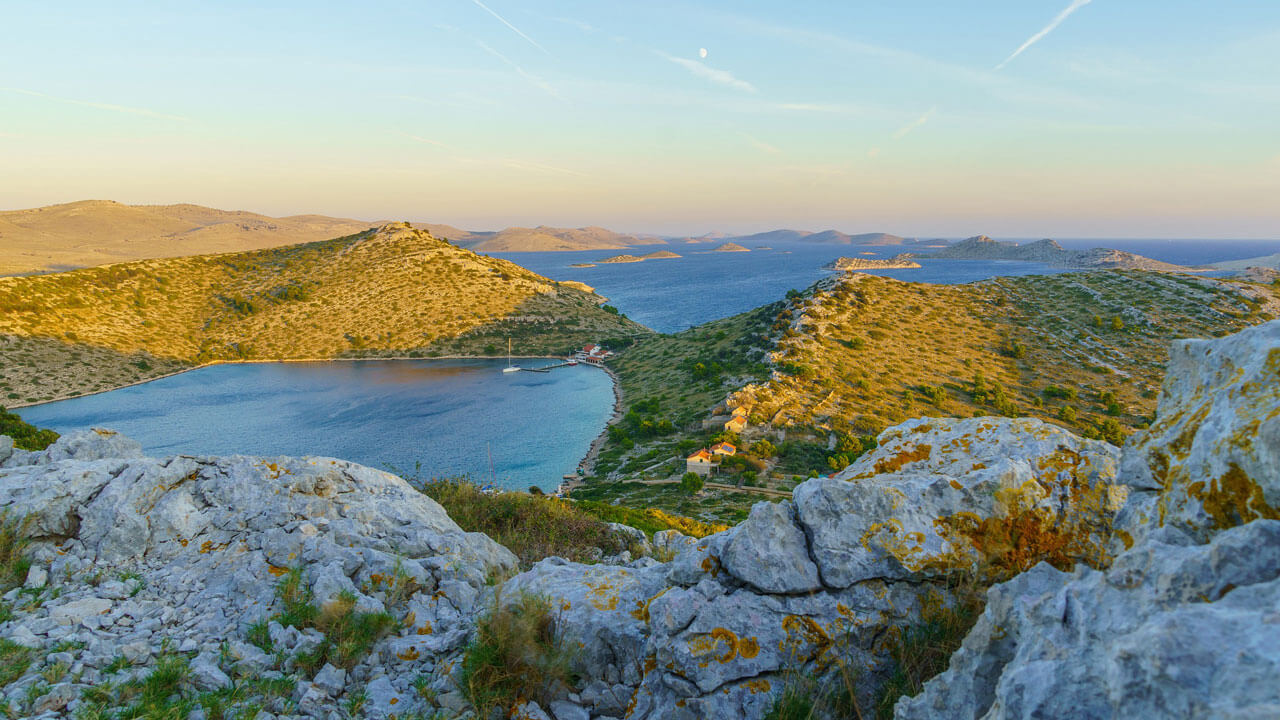 Not a single island, but instead a group of islands, the Kornati Islands are just off the coast of Zadar and are a magical place for those who love the water. 89 of the islands are part of the Kornati National Park which draws in visitors with clear waters for snorkelling, cliffs for views, and untouched natural landscape. It’s possible to sail here too, but a permit is required. The islands are uninhabited but they are a great place to visit on a day trip from Zadar. 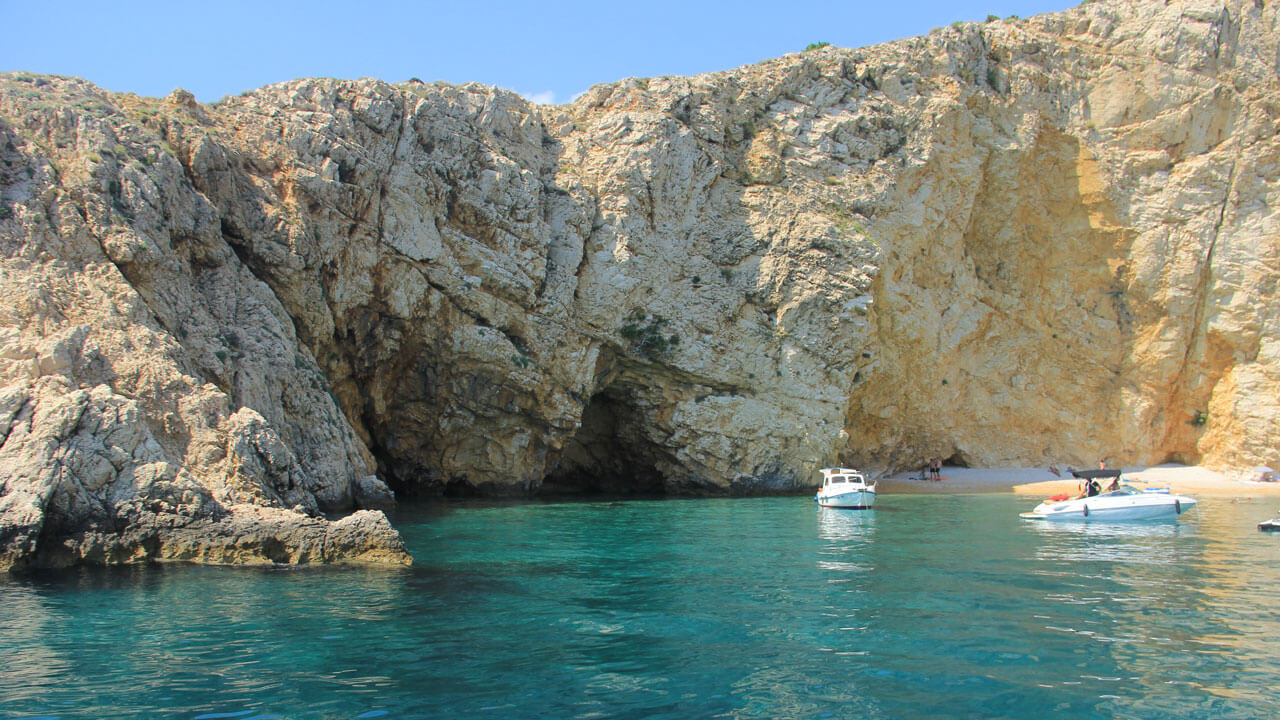 Krk is a large island in northern Croatia that is accessed by the mainland via a bridge. Nicknamed the ‘Golden Island’, Krk is a great spot for families, beach lovers, and those who adore nature. With beaches along the coast and a rocky interior, this diverse island truly has something for everyone with lots of watersports and hiking available. 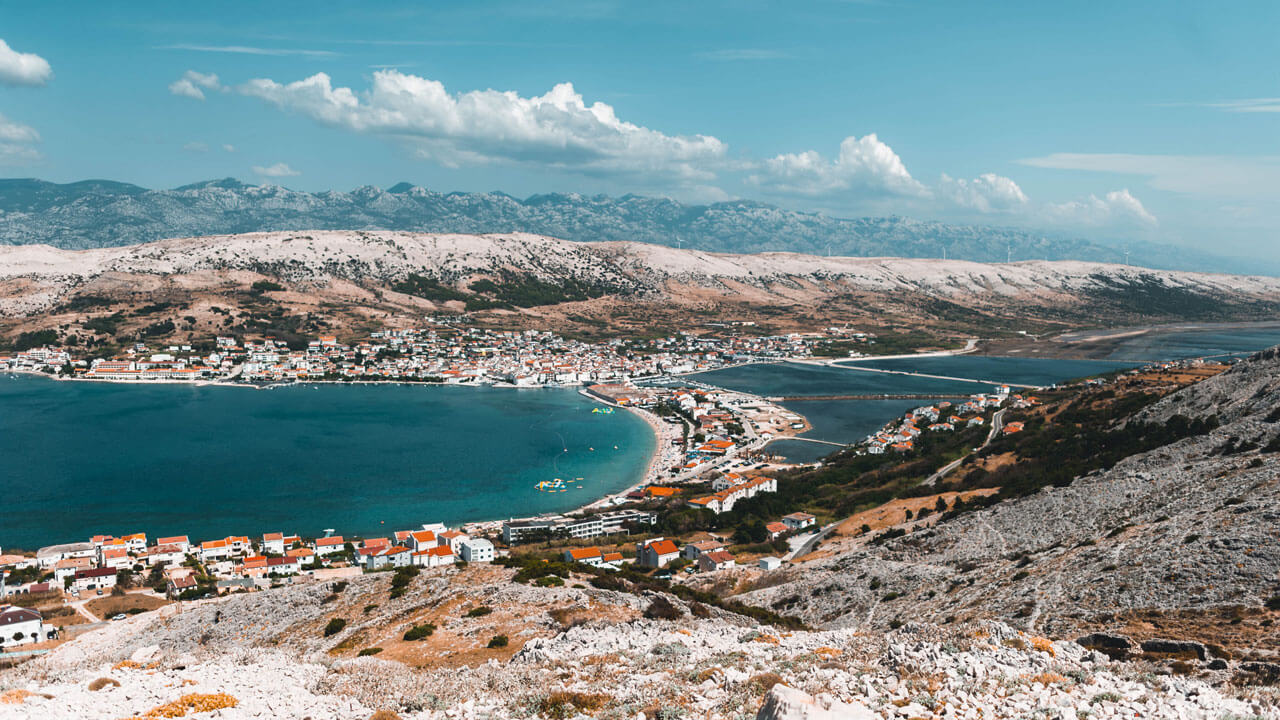 Pag is notoriously known as the party island in Croatia. This Croatian island has people flocking to the island every year as it plays hosts to some of the world’s best DJs who come here to perform at top festivals including Zrce Spring Break, Hideout, Fresh Island, and more.

Zrce Beach is frequented by tourists and locals alike, and aside from partying and music, Pag is known for its sheep cheese, wine, and the many caves and bays that can be explored. 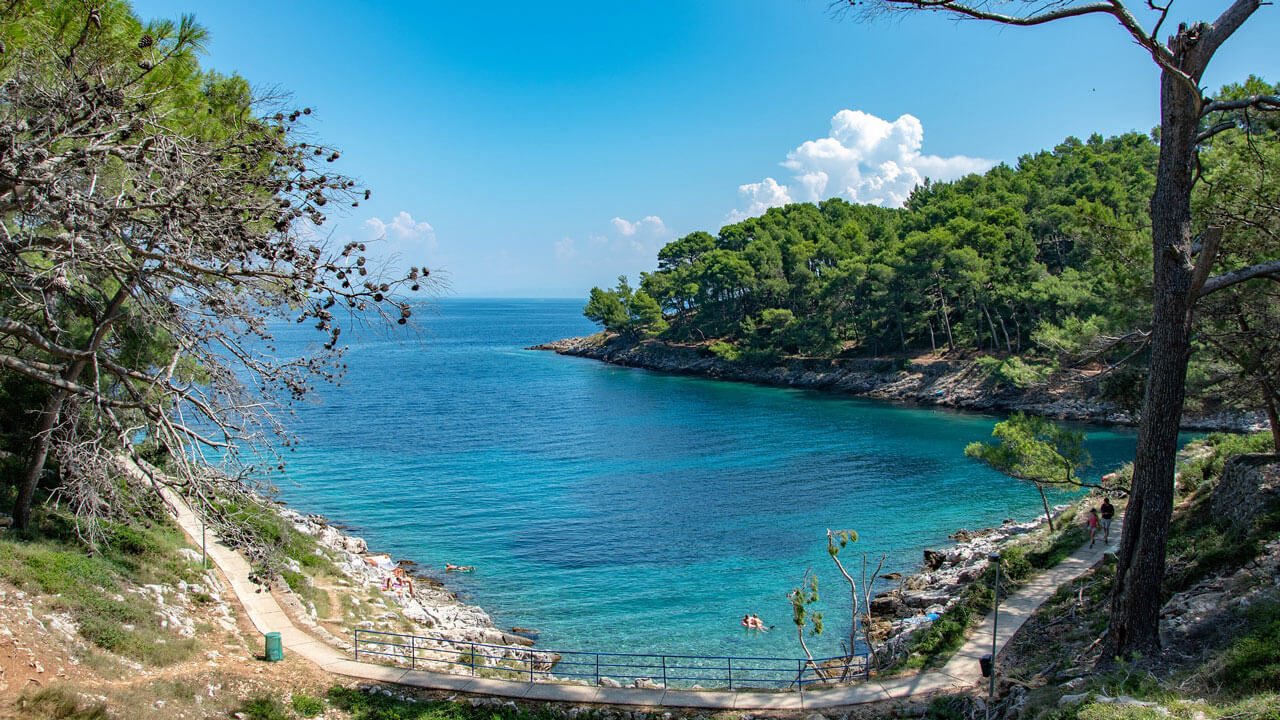 Cres is the largest of all the islands in Croatia and is best known for its cycling routes. The island is rather hilly which creates dramatic landscapes for epic views as you bike or walk parts of the island. Lake Vrana is also on this island, one of the deepest freshwater lakes in Europe. 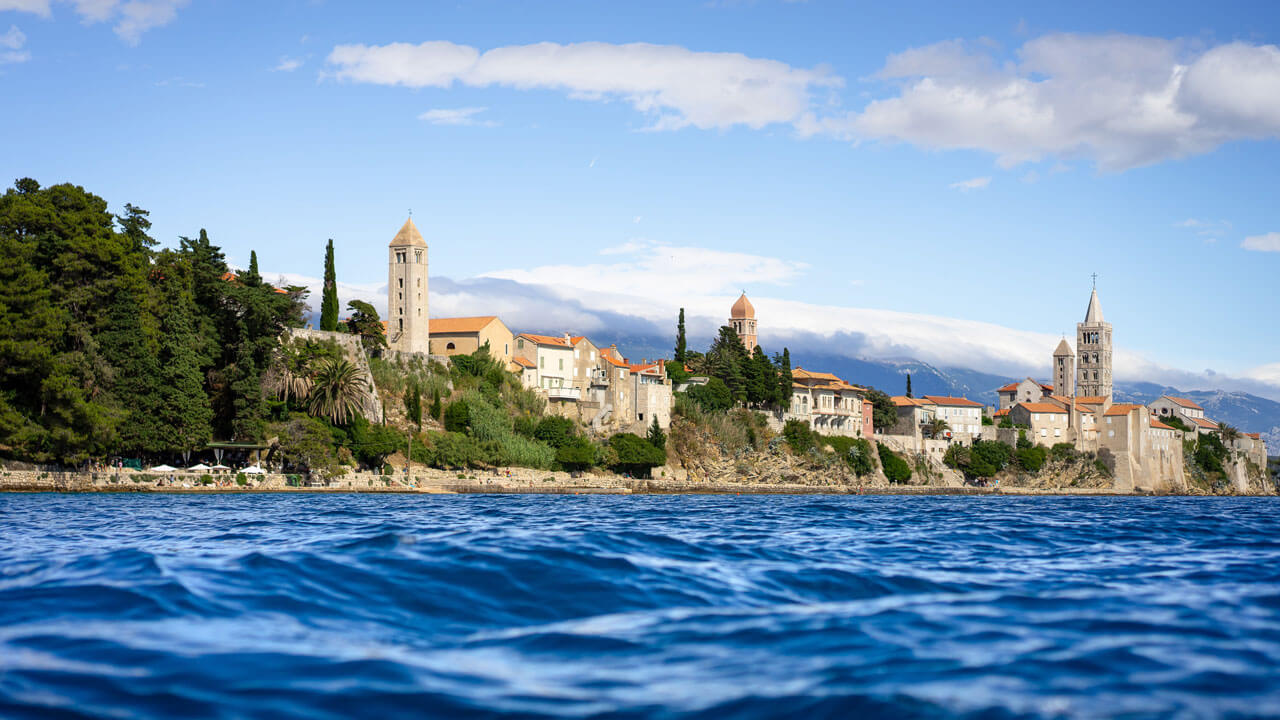 While most islands in Croatia are seasonal, Rab is an island that can be visited any time of the year! With temperatures to enjoy year-round and being one of the greenest Croatian islands, Rab is ideal to visit to see Komrčar Park and is one of few places in Croatia that has sandy beaches instead of pebbles. Rajska and Paradise Beach are some of the main beaches to visit but with the interior of the island being quite mountainous, there are also ample hiking opportunities. 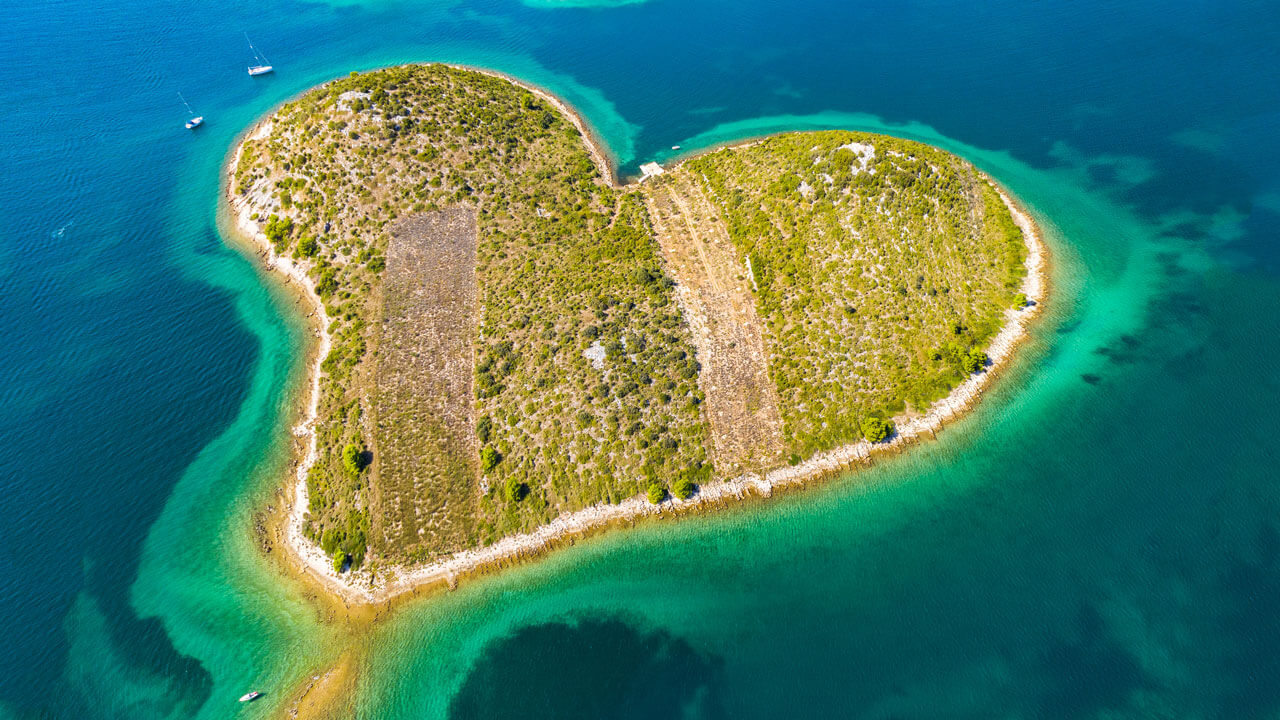 This island is famous as being the lover’s island for one simple reason: it’s shaped like a heart! Though this island is privately owned, you can get a chartered boat from Pašman or Zadar. The island is uninhabited so there is nothing to do on the island itself but sailing around the island would be quite romantic!