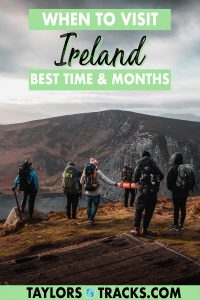 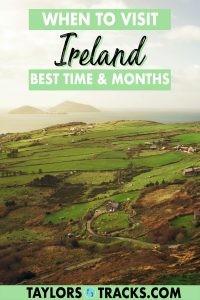 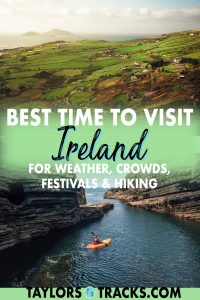 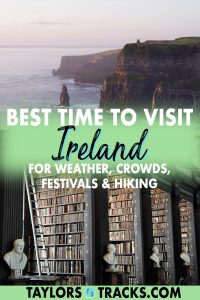 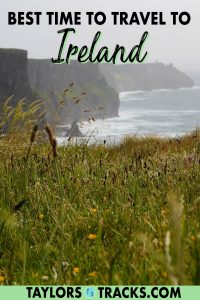 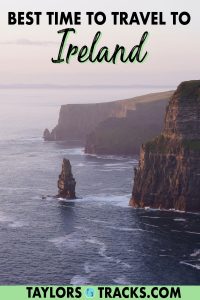 If you’re visiting Ireland, lucky you! It’s one of Europe’s most incredible destinations with so much to see and do when you’re there.

Planning a trip is no easy feat so, to take some of the pressure from your shoulders, we’ve put together this guide to the best time of year to go to Ireland, based on your needs so that you can have a great time when you go.

The best time to visit Ireland will be different from person to person, but we’ve broken down a number of important factors, even whittling it down to the best month to go to Ireland. Enjoy your trip to Ireland!

Best Time to Go to Ireland

There’s a lot to consider when planning your Ireland trip. Flight prices, weather, events, and activities all change at different times of the year, so we’ll run through each to help you choose the most appropriate season or month for you.

Ireland and Northern Ireland are known for their rainy weather, but that doesn’t mean you’re destined to get wet throughout your trip.

In fact, there’s only an average of 150 ‘wet days’ (days where the rainfall is 1mm or more) in Ireland each year in the east of the country, and 250 in some areas of the west coast.

The eastern part of Ireland is known as ‘the sunny southeast’ because it’s the sunniest part of the land and, seeing as the weather in Ireland is generally mild, you’re unlikely to come across long, heavy showers, blistering heat, or heavy snow when you visit.

However, summer and autumn are the best seasons to visit for warmer weather, and the summer has long days, helping you make the most of your sightseeing and activities. The spring and summer are the driest seasons and you can expect the most rain in the autumn – October in particular. The best month to visit Ireland weather-wise is July.

If you’re trying to keep your budget to a minimum, the cheapest time to travel to Ireland is in the winter. Not only are your flights and accommodation going to be cheaper, you may save a few Euros when you get there because everything you do will be out of peak season.

The only exception to the winter being a cheaper time to fly is Christmas and New Year! Lots of people will travel to see their families and loved ones on Christmas Day, so flight prices and hotel prices can really skyrocket during that period.

Other less expensive times to fly are early and late spring, before and after the school holidays, which usually fall somewhere around mid-February. When you get to May, airfares and accommodation fees start creeping up to summer prices.

So, on balance, the cheapest time to visit Ireland is in the winter, but early and late spring are also cost-effective and you’ll get more value from your trip if you prefer warmer weather.

The peak for tourism in Europe is April – September and, if you’re looking for the best time to travel to Ireland to avoid crowds and queues, there are a few things to consider.

There are also specific dates that are definitely going to be busy in Ireland. The most obvious is St Patrick’s Day, the day that celebrates the patron saint of Ireland. This is a day (and, oftentimes, weekend) of huge celebrations across the country – and across the world. So, on 17th March, beware of crowds!

December 8th is a very popular shopping day in Ireland and will likely be extremely busy in cities and town centres such as Dublin and Cork. The same goes for Black Friday (27th November) and Boxing Day (26th December).

School holidays will be some of the busiest times of the year to go to Ireland, especially at tourist spots. School holidays vary from school to school and area to area, but a rough guide is that schools closed around Christmas, Easter, late October, mid-February, and from mid-July to early September.

If you’re hoping for fewer crowds, avoid these periods.

You can catch awesome events and festivals in Ireland all year round, but peak festival time is definitely June, July, and August. Some of Ireland’s most loved festivals are Kilkenny Arts Festival, Cork Jazz Festival, and Galway Arts Festival, but you can find the full list of Irish festivals here. Make sure you book in advance because these events can get really busy and leave you without accommodation.

It goes without saying that a brilliant time to visit Ireland is St Patrick’s Day. This is one of the biggest celebrations on the Irish calendar and you’ll find a great many parties, activities, and live music events going on across the country.

Around 500,000 people go to the parade in Dublin for St Patrick’s day and, while you’ll need to book tickets for the parade and you can expect big crowds, this could be said to be the best time of year to visit Ireland.

Bloomsday is an annual event held in Dublin on 16th June. It’s a celebration of Irish novelist, James Joyce, and Dublin hosts awesome activities and events on this day. You can expect activities such as dressing up in Edwardian clothing, pub crawls, retracing Bloom’s route, and more. If you travel to Dublin for this event, you’ll be in for a real treat but crowds are likely.

Ireland is a great place for hiking because it doesn’t get too hot – not even in the warmest months.

With that in mind, you can hike in Ireland at any time but, because of the longer daylight hours, clearer skies, and comparatively lower rainfall, summer is likely going to be the best season for hiking in Ireland.

However, if you want to avoid the crowds, hiking in the spring may be best for you. Spring isn’t as busy, especially in tourist hotspots, and the weather is just starting to warm, so the temperature is just right for hiking.

Like most places in the northern hemisphere, Ireland is warmer in the summer (June, July, August) and colder in the winter (December, January, February). You’re not likely to experience any extremes of weather when you’re visiting Ireland as temperatures rarely soar but, depending on your preferences, some Irish seasons may be better suited to you than others.

With warmer weather and lots of daylight, summer is the most popular season to visit Ireland.

The warmest time in this season is July, with the average temperature at 20°C, closely followed by 19°C in August, and 18°C in June. Depending on what you like, this could be the best time to visit Ireland weather-wise.

With average temperatures (highs) at 10°C and lows of 5°C, the temperature really starts to drop in the autumn, especially later on in the season.

In September, the average rainfall is 60mm, the average wind speed is 9.3 mph and, on average, there are 12.5 hours of light.

This really changes for November though, where the average rainfall is 80-100mm, the average wind speed is 10mph and, on average, there are 8.5 hours of light. October falls more or less in the middle of the two in terms of daylight hours (an average of 10 hours per day), but is a rainier month with an average of 90-110mm and 10mph wind speeds.

Naturally, the winter will be the coldest time to visit Ireland, and you can expect highs of 8°C and lows of 4°C, but sometimes it can feel colder because of the damp air, so make sure you really wrap up!

The daylight is limited in the colder months and winter solstice (the shortest period of daylight) falls on either December 22nd or 23rd. The wind speed in December can be around 10.5 mph and 10mph in January and February. This is the darkest time, with daylight hours averaging 8.5 in December, 10 in January, and 8.5 in February.

You might see snow in the winter in Ireland, but it’s not that common, even up in the mountains.

Spring might be a bit chilly in Ireland, especially at the start of the season, but this is when the landscape and nature comes to life and it is oh so beautiful! People say this is the best time to visit to see spectacular rainbows.

When is the best time to go to Ireland?

We think the best times to go to Ireland are in May, June, September, and October, just before and after it gets really busy with tourists. This means the tourist attractions will still be open, but they won’t be as busy and, in some cases, might even be a bit cheaper!

Speaking of cheaper, June and September aren’t peak times for airlines and it won’t be the school holidays in Ireland and the UK, so flights are likely to be a bit less pricey during this time, too.

When is the best time to visit Ireland and Scotland?

On balance, the best time to visit Ireland and Scotland is early and late summer. You’ll be able to miss the big crowds of tourists, but still get to make the most of the long hours of light and warmer weather. Plus, there are still plenty of exciting things going on, and lots of wonderful things to see.

If you’re on a strict budget, spring and autumn are still awesome times to go to Ireland and Scotland – you’ll save yourself a few pennies and get to see the beautiful nature and scenery that falls hand in hand with these seasons.

Continue planning your trip to Ireland!