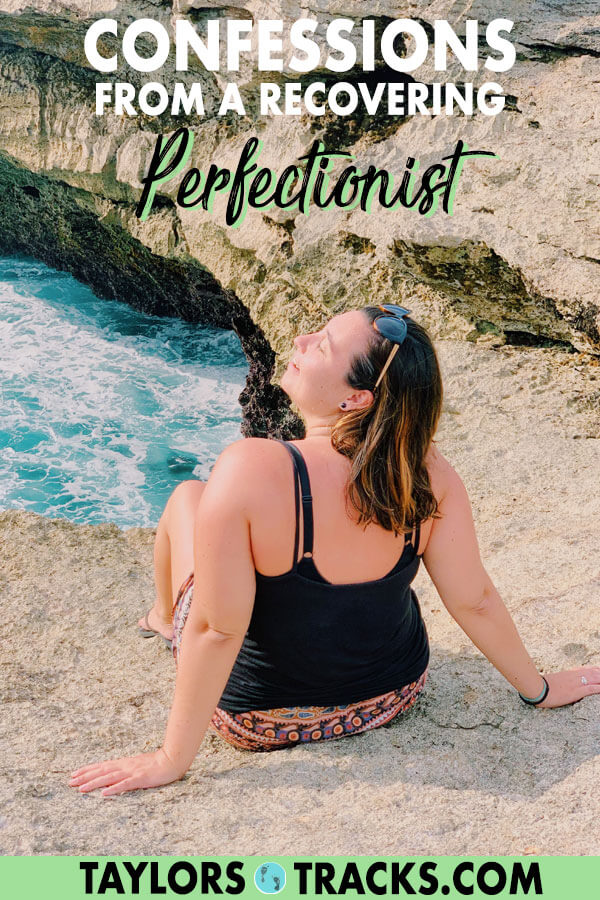 Perfectionist was a label that I used to wear proudly.

I thought all of this true until my world was completely tipped upside down and everything I held myself accountable to was quickly crumbling in front of me.

I used to think that being a perfectionist meant that you’re a hard worker, that nothing is done without a detail going unnoticed, that you will show up before you need to be there and stay later than expected.

Perfectionism was holding yourself to the highest standards possible and letting no one down, especially yourself. Though you did let yourself down all the time, or at least that’s what you told yourself, because how can you achieve the impossible?

No one will ever expect anything less from you than perfect, especially yourself. You are the one who holds yourself to these increasingly high expectations that grow after each day, week, month and year as the world becomes a place where you need to excel in everything to really matter, to impress anyone, but mostly yourself.

To be a perfectionist is to constantly do better, always topping yourself, being better than others and only ever striving for the best and then beyond.

Perfectionism is what ultimately lead to my downfall.

Perfectionism is what caused me so much self-harm in ways that I didn’t yet understand. It hurt me from the inside out as I was completely oblivious to what was going on, how I was abusing myself.

Being a perfectionist is something that I consider hell to look like.

But being a perfectionist is what got me through school. I didn’t just breeze through. I excelled, I did almost every possible extracurricular activity in school and outside of school.
It got me through bullying in elementary school, I mean I had teachers who praised me right? Who needed peers when I knew that the adults understood me and I had straight A papers to wave in my bully’s face?

Being a perfectionist also got me through high school where it kept me so busy that I thought I was on the right path until I realized that I wasn’t so I switched lanes and then kept going, thinking that was the right path too.

Being a perfectionist got me through college when it kept me so busy that I didn’t have time to think about what I really wanted.

All this time I thought that being a perfectionist was helping me.

Perfectionism got me a lot of places, a lot of praise, a lot of good grades and into a lot of cool hobbies.

But perfectionism also got me a lot of jealous friends, it got me angry at myself (like all the time), it got me a shiny degree and it got me to hate myself.

Instead, it lead me through hell and back a few times until I finally decided to ditch the whole idea of perfectionism and live a life that wasn’t held to ridiculously high standards that no one should ever hold themselves accountable too because it’s just. not. possible.

Just a few weeks ago I was told that being a perfectionist wasn’t a good thing.

My mind went haywire. It couldn’t comprehend what this person had just said to me.

What do you mean that perfectionism isn’t a good thing? Isn’t being perfect what we all want to be!?

In my world, being a perfectionist was all anyone should want to be.

Her short answer was no and my mind continued to throw itself around in my skull searching high and low trying to understand her clearly insane reasoning.

But as she began to tell her own story and relay what she was doing to herself on this route to being the ultimate perfectionist, I sat there listening, understanding. Understanding that it was I too, who was walking the same path that she was once on but choose to get off of.

I decided that I needed to get off of that path too.

I was walking on a dangerous ledge that only lead to steeper mountains and more deadly drops.

It was a scary path that I didn’t see the end off but it was surprisingly easy to get off.

Now I can only say how beyond grateful I am for discovering just how nasty of a habit being a perfectionist it.

Weeks later I feel like I’m able to breathe.

I no longer feel like I’m angry all the time.

I suddenly see the light at the end of the tunnel and it’s closer now.

Being a perfectionist lead me to beat myself up unconsciously. Without thought, I would tell myself how bad I was, how I wasn’t enough, how no one wanted me until I reached some impossible standard.

I lead myself to believe that I could always be more, do more, see more and thus constantly expected more.

It wasn’t a happy place to be in.

But where I am now? It’s a happy place.

It’s a place where I’ve learned to tell myself that I don’t even have to make to-do lists. It’s a place where I’m comfortable with failure, where I allow myself to grow, where I don’t hold myself accountable for every little detail and where I ask for help because I’ve realized, thank god, that I can’t do everything.

Weeks after making this mindset change from perfectionist to self-loving person and I’ve noticed a huge improvement in my mood, life, health and relationships.

I’ve been able to look back and laugh at how I’ve titled previous blog posts “How to Plan the Perfect X Itinerary”. I’ve used that title over and over again, it used to be one of my favourites. Now I laugh because I think how silly it was to think that a perfect itinerary actually exists.

Perfection doesn’t exist and the moment I realized that my life changed.

I say I’m a recovering perfectionist because I know that I’m not quite there yet, even though there’s no “there” to reach. It’s a never-ending path.

My new path still has bumps because I still have my perfectionist side peek out every so often, reminding me to do more or that something’s not quite right.

But these days I made it over the bumps and away from the drop offs easily as I’m pretty quick to shut down my perfectionist side with kindness and move on with my self-loving fabulous self who thinks that everything I do is pretty spectacular even with its flaws.