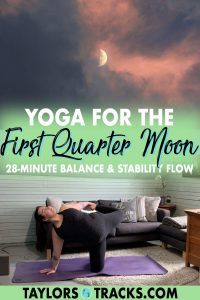 While new moon yoga and full moon yoga are widely popular, there are a total of eight moon phases that you can embrace. Practicing yoga on the quarter moon acts as a great reminder to follow through with the intentions that you set with the new moon and to begin taking action.

What is the first quarter moon?

What is the first quarter moon also called?

The first quarter moon can also be referred to as a half-moon because from Earth you can see half the moon illuminated.

What does the half-moon mean?

Logistically it just means that the moon is a quarter of the way through the moon cycle but of course there are spiritual meanings and how the half-moon affects us. While the new moon represents new beginnings and is an ideal time to set intentions, it makes sense that the first quarter moon (the half-moon) is a time for action, doing, and taking the first steps for the intentions that we set during the new moon.

The first steps and actions are often lead with resistance, tension, and questioning our decision making. This means that it’s a great time to remind yourself of why you chose your intentions with the new moon.

During this week be open to making mistakes, running into obstacles, and staying grounded to remind yourself of your stability and strength. This is the time when you make your decisions begin to come to life.

Yoga gives us the opportunity to connect with our energy, listen to our bodies, and make space in our minds and bodies for our true wants and needs to come through. The moon does just the same thing with its powerful energy and practicing yoga with the moon phases is a great way to connect your energy with the moons.

While some yoga styles such as Ashtanga don’t believe in practicing yoga with the moon, I believe it’s ultimately up to our bodies’ individual needs during each moon cycle. Sometimes your body craves the same type of energy that the moon is giving off, other times it wants nothing close to the same energy.

At the end of the day, moon yoga is just a chance for us to have a guiding theme that is connected to nature and can be a great reminder of the challenges of beginning, setting, and sticking with our goals and intentions.

This first quarter moon yoga is created around the fact that this moon phase is all about sticking with your decisions. This yoga for decision making will show you on the mat that once a decision is made you start from the ground and build up from there, knowing full well that you can always take a step back and return to where you started for extra stability. The lessons that you learn on the mat here you can also take into life off of the mat too.

I hope this half-moon yoga sequence has left you feeling grounded and more stable on and off the mat! If you loved this video and want to see more, subscribe on YouTube!

Other Ways to Embrace the Moon Cycle & Astrology