With the start of every new year January 2019 was no exception to me making plans, creating goals and telling myself that I was going to kick ass.

While there’s nothing wrong with doing that, I did set some unrealistic expectations for myself which then led me to be disappointed in myself and be hard myself, a typical habit I formed decades ago when I was still in elementary school.

So this month I’m going to recap some of the resources that I’ve been loving this month (some of which I used before January) and share what I think has been working, but first, lets talk about travel.

Where I went in January

January started with an extended week at home cozying up on the couch with a cup of tea and a book. But come January 9th I was back to Southeast Asia.

I started off in Singapore for 2 days where I met up with a friend who was visiting for her first time and spent way too much money on food and cocktails (drinks are like S$20+).

I relished being back in one of my favourite countries that I love because of its organization, cleanliness, things to do and friendly people. I love Singapore because it’s just so easy to be there.

Next up we flew to Krabi, a new province for me in Thailand. I was so excited to be going back to one of the favourite countries in the world and to see if I felt the same about Thailand after nearly 3 years.

Krabi Town left me feeling a little disappointed, I expected…more. But I loved the night food market where I could binge on all of my favourite Thai dishes for less than $5.

Koh Lipe was a process to get to. Seriously, it took a 4-hour bus which had a 6:30AM pickup and then forking out more cash for a national park fee (was Krabi in a national park?) and a pier fee, okay fine, and then a speed boat that was, let me tell you, not okay.

We didn’t realize that this tightly backed boat had luggage and other things stored under the seats and my friend and I didn’t notice that we sat in seats that had bags of garbage stored under them. We couldn’t figure out the smell until halfway through the trip when we wondered why the reeking garbage smell didn’t go away after we left the pier.

We then made ANOTHER stop so people could take more pictures at another island with some rocks. I was not the only one on the boat who was not impressed as we were now late arriving. We did not sign up for a tour we signed up for a transfer! I’ve never experienced anything like it in my travels before.

Stopping a tourist shop yes, but not at other islands for pictures.

Koh Lipe was beautiful with clean beaches and I was happy to learn that plastic has been banned on the island, a big step for Thailand.

Our second speedboat from Koh Lipe to Koh Lanta was one of the scariest boat rides I’ve been on (I should warn you, I’m a big wimp so take what I say with a grain of salt) as we crashed down wave after wave, our bums lifting off on the seats before being slammed back down. It was a long 3 hours.

After all of the hype I heard about Koh Lanta I was surprised to see how little there was. I expected markets but it was mostly resorts lining the beaches and a national park that was pretty but not worth the entrance fee. So I layed by the pool while children screamed (seriously there were badly behaved kids everywhere) and then on the beach once my friend left and I had a few extra days on the island.

I took a lot of time to myself, journaling, meditating daily, going to yoga classes and for walks along the beach and caught up with a friend that I had met in Bali last year.

Lastly, I went to Ao Nang, also in the Krabi province for 2 nights to check out the scene which was very touristy but I really liked the vibe considering it’s a big nightlife spot which I’m no longer into. I also stayed in one of the best hostels in Asia I’ve ever stayed in, The Moment Hostel, which was a big bonus.

I could barely contain my excitement, I was heading back to Bali where I plan on living and working for the next 2 months. The morning after the night I arrived I came down with a fever and have been stuck in bed ever since and is my current position as I write this post.

I think my body is really done with travelling so much and the stress I place on myself to get work done while I’m travelling definitely adds to me getting sick more and more often.

So what did I think of Thailand after returning? I didn’t feel as much love for Thailand as I hoped I would but I still do adore the country. I think for me the biggest issue was realizing that I’m very quickly getting over the backpacking lifestyle and seeing all of the youngin’s backpacking made me want to push away even faster. The food, which is one of the top reasons why I love Thailand so much, did not disappoint.

My biggest priority of 2019: My mental health

Since I’ve started travelling it has always been about doing it as cheaply as possible so that I could visit more destinations. Staying in the biggest dorm rooms because they cost the least, sacrificing sleep on night buses to avoid paying for a nights accommodation, typically choosing one of the cheapest items on the menu…you name it I was always being cheap.

While this works for some (it did for me for a long time) I can now feel the wear and tear that it’s left on my body physically and mentally.

Pair this with my obsession of growing my blog (it’s my baby, of course I’m obsessed with it) and building a business that earns me enough to travel even more, the added stress I put on myself to always be doing more, being on camera constantly, always taking the best pictures and doing everything I possibly can in a destination so I can write about it and there you have it, a run down person who is on the verge of breaking.

Against my better judgment I planned a 3 month holiday through Europe, Israel and Jordan when I know my limit is 2 months in late 2018 and I cam back home exhausted.

I had a really difficult time adjusting with jetlag and I felt exhausted no matter how well I slept. My stomach was bothered by Thai food but it was too good for me to stop eating (#noregrets, just had to keep tissues on me in case I needed to run to a toilet) and I felt an immense pressure to get things done and be with my friend even though she was totally fine with me taking time to work.

Things looked up after my friend left and I took some serious alone time where I had room to think (I’m not blaming my friend at all, these are all pressures I put on myself) and they looked up even more when I got to Bali, adored my private room which I saw for the first time and had old and new friends welcoming me back with open arms.

Then I got sick and I feel like I just want to go home. I’m hoping I only feel this way because I’m sick. I just cried while I wrote that (dramatic much? yes, I’m always dramatic).

Regardless of how tough this past month has felt (I know, living on Thai islands and going to Bali is difficult) there are a few things I’ve been doing to help keep me in a more positive space because despite the bad days I had good ones too.

What’s new on the blog

This month has been all about Israel! While it’s no secret that I didn’t like Israel I still think it’s a country that should be visited and for you to decide for yourself whether you like it or not.

And my first Jordan post is up: 10 Best Places to Visit in Jordan

What I’ve read this month

I told myself that I was going to follow Pop Sugars reading challenge…until I realized that it would have me reading mostly fiction books and I prefer non-fiction. I decided to change my goal to 52 books this year, one a week and so far I’m on track!

I so enjoyed this fascinating story of a girl who grew up in the country in Idaho, having no education, strict Mormon parents and a very unusual upbringing to become a woman who attended Cambridge and Harvard and ended up with a Ph.D. Just goes to show you can do whatever you put your mind to.

To Kill a Mockingbird by Harper Lee:

I never had to read To Kill a Mockingbird in school and I’m glad I didn’t because I know I would have hated it but as an adult, I enjoyed reading this timeless classic.

In the Country We Love by Diane Guerrero: Diane Guerrero, one of the actresses who plays a Latina character on Orange is the New Black gives an insiders look into her career as an actress, the darkest parts of her life and facing her parents deportation when she was only a child. This memoir is a real eye opener.

Wow. Homo Deus opened up my eyes to our future and it is not what I expected. Perhaps it’s because I’ve never thought so deeply about what’s going to happen in the future but regardless this book is an intelligent look into what is likely to happen, even in our lifetime.

Positive news of the month

January has been my highest month for traffic ever, I reached over 87,000 pageviews! It’s all thanks to you guys!

I’m back in a private room in Bali and it’s glorious.

I got really personal on Instagram, admitting to body image issues and announcing that my Instagram would be taking a different turn and you guys were SO supportive. Your comments were really touching and it was my most liked picture in a very long time. Here’s the picture:

Normally I would never post a picture like this because my first reaction was "Omg, I look so fat." Normally I'd post a picture of me walking off into the distance, just far enough so you couldn't see just how chubby I am. But I promised myself in 2019 that I would be less "Instagramy" on Instagram and post more pictures that represented my travels. And guess what? I'm actually not always walking off into the distance, a surprise, I know 😂⠀ —–⠀ I'm into more pictures that show happy faces, real bodies and accurate representations of where I'm visiting. And I've very happy to say that this beach, Railay, really does look this amazing in real life.⠀ —–⠀ #thailandinsider #amazingthailand #thailandtravels #letstraveltoday #girlaroundtheworld #girlsvsglobe #explorerbabes #jetsettingchicks #girlsjustwannatravel #travelmode #discoveraround #wheretofindme #mytinyatlas #doyoutravel #roamtheplanet #traveltagged #traveldeeper #theglobewanderer #travelstoke #worldcaptures #travelenvy #passionpassport #discoverglobe #teamtravelers #stayandwander #exploremore #travelmore #travelinggram 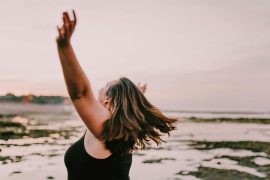 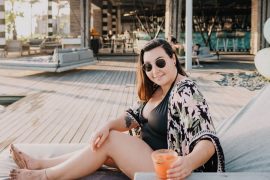 Where to Stay in Canggu, Bali (For Any Budget) 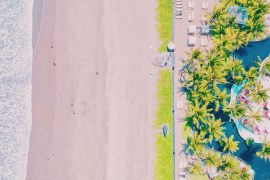 Where to Stay in Uluwatu, Bali (For Any Budget)