May was an extremely confusing month for me and travelling while trying to figure myself out, getting into my head and being a country that I didn’t particularly like was just a tad overwhelming.

That being said, I’ve had some big realizations, some of which I shared last month but am going to reflect on a bit more as I’ve had the time to dig deeper while in a more peaceful place.

I also opened up more on Instagram about what’s going on because I feel like sometimes I’m not as clear as I want to be with you guys. I’m a pretty open person and share almost everything (but not everything cuz a girl has got to have some things to herself!) but I felt like some of my messages weren’t coming through.

The feedback I got, the people that reached out and made connections was really special. I want to thank you all for sending me encouraging messages (there was one that was not so nice but whatever) it really means a lot to me and I hope that in the future as I share even more and am myself more on Instagram and this blog that we’ll feel more connected because in truth that’s what I lack most of in my life at the moment: connection.

Where I went in May

As many of you know, I spent just over 2 weeks travelling in Morocco and I didn’t like it. To summarize quickly, I found the men too much to handle with sexist comments almost every time we walked outside, the Medinas were overwhelming and were too easy to get lost in in my opinion and overall it was not a high vibe place.

While Morocco is an absolutely beautiful country, I won’t go back and encourage travellers to do group tours if they wish to visit and avoid the almost constant harassment. I know everyone has a different experience, but based on mine this is my best advice.

I’d also like to bring up a point that may be somewhat controversial. Should we be travelling to countries and supporting countries that treat women poorly? I’m not saying that all Moroccan men are bad and that all women are treated badly there, but you can’t disagree that there is a large percentage that are.

Just some food for thought, it has been something that’s on my mind a lot lately and I’d love to hear some opinions.

After Morocco, I went to Spain. It was my first time back in the country since 2014 when I stopped in Barcelona during my Contiki tour after college.

I opted to spend a week in Madrid followed up by 3 days in Granada and then 3 days in Seville. I purposely came to Spain to visit the south because I had heard so many good things. It was really nice too because the architecture was similar in many ways to Morocco (obviously because the Moors were in southern Spain way back in the day) and while doing tours I was able to learn more about the architecture and culture than I did while I was in Morocco.

I have to admit that my wallet was crying while I was in Spain. I haven’t travelled western Europe during the peak season for years and I was definitely not prepared to be forking out so much money!

After I left Madrid prices in hostels rose to €150 a night because of some soccer event. My mind is blown. I don’t understand who would pay that and it makes me cry that people would pay that for a shared room just because of of…sports.

When I visited Spain in 2014 I didn’t like Barcelona so visiting again now was me giving Spain a fair chance. Personally, I didn’t love it. But I’m having a hard time deciding if it’s because I’m going through a rough patch and would rather not be travelling or if I just am not as madly in love with Spain as most of the world is.

While there I found myself missing home and how kind Canadians are. This isn’t to say that the Spanish aren’t nice, Canadians are just a whole other level of nice and having people smile back at you, walk around you instead of into you and overall just be very courteous is oftentimes not something I see while travelling, especially in Europe.

While in Spain I allowed myself to just be. It was wonderful. Instead of running around from site to site I enjoyed sitting in the parks, didn’t give myself shit for not doing everything and I got to spend some time with my thoughts instead of distracting myself with everything I could do in the city.

Now I’m in Milan, not really being a tourist and waiting until I head up to Trento for a travel blogging conference, Traverse, to start!

Why listening to my intuition is life changing

When I first started following inspiring people who believe in manifestation, talked about mindset and how to change your life, they all suggested, demanded really, that you listen to your intuition. I got extremely frustrated because my only question was HOW?!

Listening to your intuition is a ‘woo woo’ way of saying listen to your gut or your heart. Get out of your head and really feel through your decisions.

In May, I was able to do that, mainly because I’m getting better at listening to my intuition and also because the signs were so obvious that I couldn’t ignore them any longer.

I craved alone time, space and quiet areas where I could write, drink a matcha latte and work on the projects that have been bumping around in my head.

I wanted to journal without a group of teenagers squealing over breakfast beside me. I wanted to meditate without hearing cars on the street. I wanted to stay in my PJ’s all day. I wanted to do anything but travel.

Travel has become a chore for me and I held a lot of it back on Instagram because I was scared of people judging me, thinking that I’m spoiled or privileged (which I am) and just taking advantage of it and then being a cry baby because life wasn’t working out how I wanted it to.

In truth, life did work out how I wanted it to. I got my dream of travelling the world, making a passive income and being able to go wherever I pleased.

But it’s also true that dreams change. People grow up, they get new ideas, new passions and they realize that something they once wanted is no longer what they still want.

I had reached my dream at the age of 26 and my mind was asking me what was next. My soul was telling me that travel blogging didn’t align with me. I feel like I have a purpose in life, like there’s something more and I knew deep down that helping people travel the world will never fill me up.

Don’t get me wrong, I will always love to help people travel but I’ve just come to the realization that it’s not enough.

Travel allows people to run and hide and use it as a distraction (which is also what I’m currently doing).

While I believe everyone should travel, I now know as a fact that travel does not solve problems (from personal experience) and want to be able to help people discover what to do after travel which is why I’m branching into self love.

My intuition gave me feelings of exhaustion, overwhelm and uneasiness as signals. Confusion was a by-product of my head and my heart not aligning.

My head said, “keep doing what you doing, this is what you know what to do.” And my heart said, “you know this is no longer making you happy and you know the things that will make you happy: connection, a base and doing the things you’ve been wanting to do for years.”

Deep down I knew the answer already. And when I finally decided that travel was no longer for me and I decided to spend $1700 getting home and then coming back to Europe for a commitment I already had, I cried when looking up flights and then I cried when I booked them.

First tears of confusion, I thought, but really they were letting me know that I needed to book the tickets. When the confirmations came through the tears turned to joy and with each passing day I knew that it was the right choice.

I hope that in sharing my story I can help or inspire someone to come to terms with whatever it is they’re going through and share that travelling is not always rainbows and butterflies and that it is not for everyone.

I’ll be going home to Ottawa, Canada after my conference for 2 weeks and will get to help my sister move to a new province, something I wasn’t able to do before when she moved away and back again because I was travelling.

Then I’m going back to London for a self love summit which I am so, so excited for. It’s a one day event with inspiring authors and speakers and women from all over the world.

Then I’ll be coming home for the summer with zero plans other than focusing on the projects that are really important to me right now, like my memoir.

What’s new on the blog

I didn’t really work this month! That’s the joy of having a passive income 😀

But I did write two posts:

What I’ve read this month

I’m super behind on my reading goal of a book a week this year but I did finish a goodie this month!

Letting Go: The Pathway of Surrender by David R. Hawkins: I’m not going to lie, I found this book difficult to get through because you really had to focus and get everything out of each sentence. Letting go is definitely something I’ve struggled with for years but this bought taught me ways in which I can let go, how to acknowledge emotions and breaks it down in a way that I was better able to understand myself. It’s a powerful read that I highly recommend.

That’s it from me this month, I can’t wait to see what the summer brings! 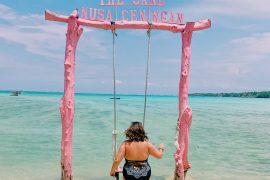 Are You Using Travel to Escape From Your Own Life? 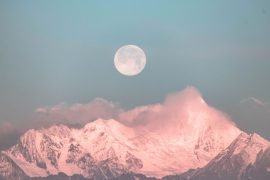 How to Create Your Own Full Moon Ritual