Tales from Thailand is a series that will be written over a course of a year of my daily life in Thailand as I live abroad teaching English. These tales will include the good, the bad, the funny, and sad. I hope they entertain you and encourage you to try living abroad!

I came to Thailand because I wanted to experience culture shock. I wanted to put myself in a situation where everything was different, where I could experience a new way of life, understand different people, and learn about their culture. On November 25th I got to do exactly that and I couldn’t help but think the entire day “This is why I came to Thailand.”

I live in Phitsanulok, a small city in lower northern Thailand that is home to the most beautiful Buddha in the country and holds a lot of history. Sukhothai, a city about an hours drive away is even richer in history, as it’s the oldest city in Thailand and home to the Sukhothai Historical Park where Thailand’s first inhabitants lived.

I spent the day biking the grounds of ancient temple ruins and Buddha statues before participating in the Loy Krathong events in the evening. It was quite a treat for me to celebrate this festival in Sukhothai because it is where the festival originated, and therefore where the largest event in Thailand is held.

Loy Krathong can be translated to “float a basket.” People of all ages light and float beautifully decorated lanterns that are made of foam, banana leaves, and many other decorative pieces. These lanterns come in many shapes and colours and were sold around the entire grounds by locals on mats.

Once lit these lanterns are let go into the water to thank the God of water. Loy Krathong is celebrated on the full month of the 12th month of the Thai calendar (November in the western calendar). It is celebrated at this time because it is the end of the rainy season.

Many people will place money or other small objects and float them down the river as well, sometimes the less fortunate running into the water to take the money. Often lanterns are lit that are let go into the sky, but due to government restrictions this year because of problems with flight delays last year the lanterns were forbidden.

I couldn’t help but think how peaceful it was to celebrate without giving, without having to buying or spend money. Every celebrity in the western culture seems to cost so much money. While here the festival was built up with food vendors and markets, it was there if we wanted it, I didn’t feel pressured to be buying things for other’s. I did buy a traditional lantern, which cost me 20 Baht (about 75 cents).

Elephants dressed in gold walked the paths in the park, a parade took place where couples from other Southeast Asian countries dressed in their traditional costumes. There was fire blown into the air, Thai fighters performed, and beautiful Thai woman walked around in traditional attire with some of the most extravagant head pieces I’ve ever seen.

The shrines in the grounds were decorated with lights, the lanterns floated delicately in the water, and all the reflections of the lights on the water made it so magical.

It was crowded but everyone was peaceful. I tried a noodle dish known in the area, some Thai dessert and ate ice cream out of a coconut (so good).

I didn’t stay until midnight, when all the locals came to place their lanterns in the water and for the firework show, but I felt that I had been a part of my first non-western celebration.

It was a beautiful experience, and surely one that I will remember for a long time to come. If you’re ever in Thailand I definitely suggest attending Loy Krathong, especially in Sukhothai where it was very foreigner friendly.

More of the Tales from Thailand series:
Surviving Week One
Moving Abroad Alone

What unique holidays/festivals have you participated in? 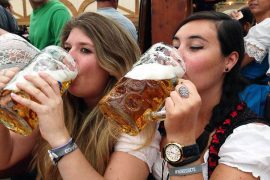 What to Expect at Oktoberfest (A First-Timers Survival Guide) 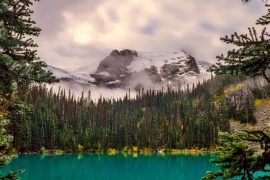 10 Most Incredible Natural Attractions in Canada 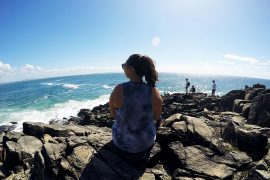 14 Things to do in Noosa, Australia