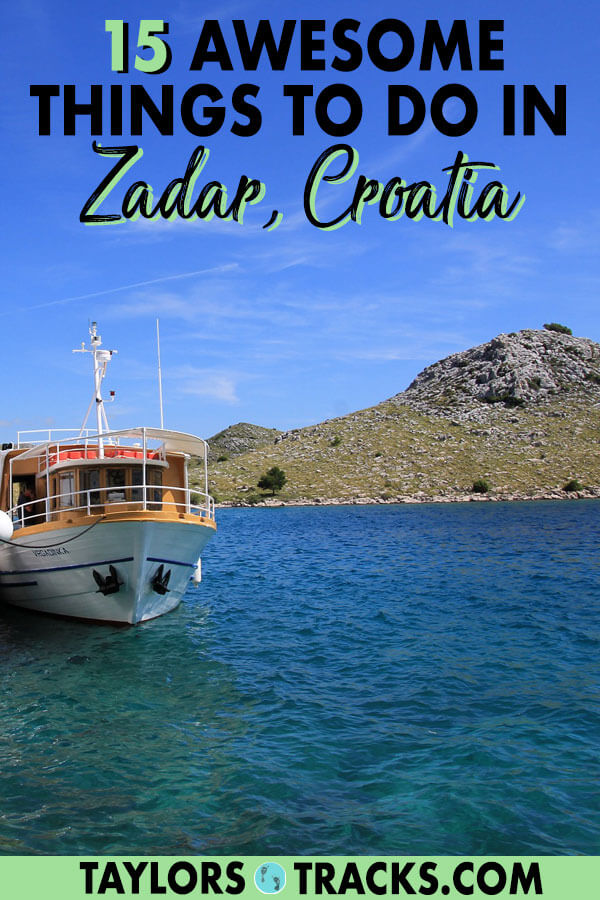 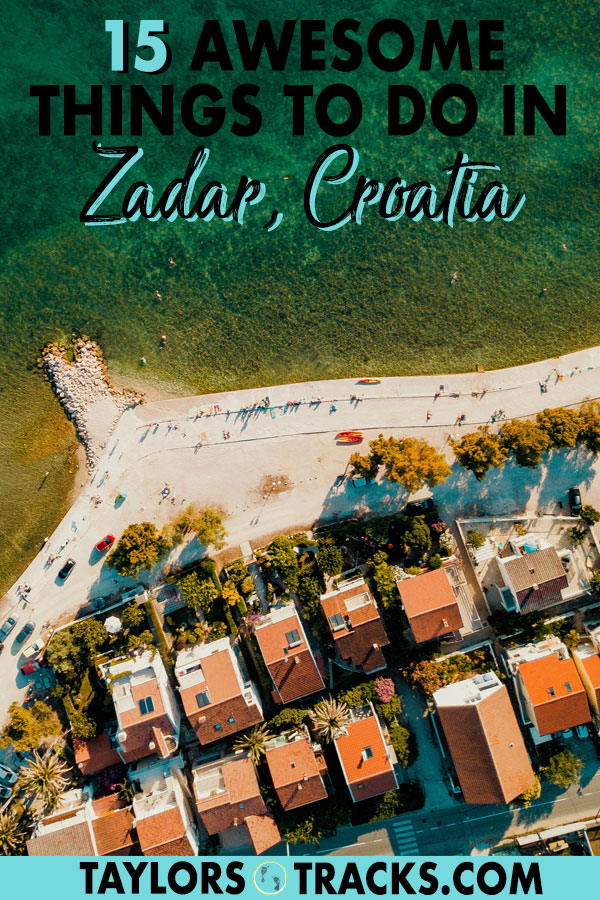 Planning a trip to Zadar didn’t come across my radar until I booked a flight to the city for the start of my Croatia trip. I was happy that I discovered this hot spot as it’s the ideal place to explore Zadar itself and more with plenty of things to do in Zadar for every kind of traveller.

Want to hit the beach? Zadar has beaches. Love history? Zadar has lots. Like seeing architectural details? Zadar won’t disappoint with Roman ruins throughout the Old Town. How about waterfalls or islands or rivers with crystal clear waters? All of that is within a day trip of Zadar.

Keep reading and you’ll have a packed itinerary with these Zadar sightseeing suggestions.

All prices are quoted in Croatian kuna. Check up to date conversions here.

Things to do in Zadar

Discover what to do in Zadar for your time in this Dalmatian city.

Stop to listen to the Sea Organ

Perhaps the most famous of all Zadar attractions, the Sea Organ is, I guarantee, unlike any organ you’ve seen before and one of the best things to do in Zadar. Designed by Croatian architect Nikola Basicis, the sea organ sits at the end of the Old Town where the water meets the marble steps that create music.

Often eerie sounding but always beautiful to listen to, the waves create the notes as water flows into pipes under the steps and creates music.

It’s most popular to visit at sunset so be sure to get there early if you want a seat!

Check out Greeting to the Sun

Just a touch further down from the Sea Organ is another installation named Greeting to the Sun. This installation was created by the same architect as the Sea Organ and as soon as the sun sets people start dancing across the 22 metre wide solar panels that light up as you move across them.

Visit the church of St. Donatus

Famed for its architecture that takes a circular shape, St. Donatus is a great example of Byzantine architecture in the Old Town. The building itself dates back to the 9th century and is a piece of history in Zadar that still stands, despite all of the destruction from wars that Zadar has undergone.

Though the entire structure is not original, many parts are still used such as some of the supporting pillars and the floor to show the stonework. Many of the stones used to rebuild what was needed were taken from the Roman Forum.

Kolovare Beach is the top Zadar beach that has everything a beach could offer. Most importantly, it’s clean with blue flag status.

It’s within walking distance of the Old Town (around 20 minutes tops) and has plenty of activities for all ages for entertainment. Showers, changing rooms, food and more are also available for you to spend the day.

Walkthrough history at the Roman Forum

You can’t miss the Roman Forum when you’re in Zadar, it’s one of the top things to do in Zadar. This large square was huge for the time when it was built from the first century BC until the third century AD. It was the main spot in the city where locals could find a market.

There are a number of areas to explore throughout the forum that are best to be seen during a tour so a guide can explain all of the details of broken stone, ruined buildings and tell you what was rebuilt and the meaning behind each.

As always, I recommend a guided tour of the city to get you acquainted. Zadar is no exception, especially since most people show up to this Croatian city without any idea of the amount of history that has past through the city’s gates.

Also known as the Cathedral of St. Anastasia, this cathedral is interesting to see because of its mix of building styles. Originally built in 9th century but then rebuilt during the 12th and 13th centuries, this cathedral’s top half has a gothic style while the bottom is Romanesque.

Inside you can find stained glass windows, stone alters and a wood carved choir. You can also access great views of Zadar by climbing up the bell tower.

Kornati National Park is made up of 89 almost barren islands, islets and reefs which make a perfect place to sail or take a cruise through and is one of the ideal day trips from Zadar.

One of the most popular areas of the national park is Telascica Nature Park where you can swim, snorkel and jump off of cliffs.

Expect to float in the salt waters of Lake Mir, visit some donkeys in the donkey reserve and to take in the stunning views of the Kornati archipelago.

Zadar has a number of museums that are worth visiting, especially if you’re interested in the history of Zadar and/or Croatia. Some of the top museums to visit for Zadar activities are:

Otherwise known as Narodni Trg, the People’s Square is the main square in Zadar where you can kick back for some food or a cool drink on a hot day and find some significant Zadar sights.

The square itself was built in the 16th century and its major sights includes City Guardhouse, Renissance City Loggia and more. In this square you could walk into a cafe and end up sitting surrounded by ancient walls!

Zadar is one of the best cities to visit Croatia’s most famous national park from, Plitvice Lakes, it’s easily the best attraction to visit around Zadar. I don’t recommend missing this park either as the colour of the water is truly a sight to be seen and it’s one of the best Zadar day trips.

A quick attraction in itself but not one to be missed when you visit Zadar is the Land gate by Fosa port which is the main gate that people would enter through into the city walls back in the day.

The gate was built by the Venetians in 1543, made obvious by the choice of the lion with wings, a standard symbol that Venetian’s once ruled this city.

Whether you want food or not a stop at Zadar pijaca (pijaca translates to market) is a necessity just to explore the smells of fresh fruit and the colourful stalls. The market has been around since the Middle Ages and is a big market compared to others in the country.

This is the perfect spot to pick up anything you need for cooking or on a tour you can make a stop here before learning how to cook drool-worthy Dalmatian dishes.

For adventure lovers, do not fear as there are still things for you to do not far from Zadar that don’t involve city activities. You can get out in nature into one of the most beautiful rivers in all of Europe where the water is warm and perfectly clear.

You’ll have the chance to navigate through some rapids, see waterfalls, find hidden swimming pools and enjoy the scenic nature all day long.

See the beauty of Dugi Otok

Just west of Zadar is Dugi Otok, one of the best places to visit near Zadar. This rugged island is great to experience by kayaking where you’ll make stops to go cliff jumping, swim in a secret bay, spot wildlife and sit back on the islands white sandy shores.

Read my detailed Zadar accommodation guide to find the best places from budget to luxury, hostels to hotels and villas.