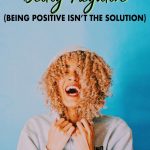 In this episode, I break down how being positive all the time actually has negative side effects.

Unfortunately, being positive has a negative side. I know that seems weird to say that being positive can actually be negative and hurt you, but it’s true. I have learned this from experience and I have had friends in the past who have used being positive as being an excuse.

Unfortunately, some of those people I’m not friends with anymore, which was really difficult and a hard realization. But life happens. Some people have to leave your life if they’re not in the same space that you are or if they’re not willing accept that you need to change.

Being around negative people hurts you. You can’t afford to have people in your life who are bringing you down when you’re working so hard to bring yourself up.

My whole point of that story was that yes, I lost a friend over being negative because she couldn’t see that she was being negative. She did consider herself a positive person though, which I want to encourage people to continue doing.

What does being negative mean?

The short answer is that you complain a lot, talk badly to yourself or others and see the bad before you see the god.

Why being positive is not the solution

They think it’s okay to complain so long as they have something positive to say after.

Maybe you’re talking about someone else and say “Ugh, so-and-so is so annoying.”

But then follow it up with “Oh, but she’s really nice when she does this.”

A lot of people, myself included in the past, used to believe that you are a positive person if you always have something good to say even after a negative comment.

How to stop being a negative person

It’s not about being positive all the time, it’s about letting go of the negative thoughts in the first place. It’s about not even saying them, not even expressing that negative energy on others, not allowing that in your mind or in your body.

Through this you can learn that being positive in a negative situation comes easily and without ignoring the negative.

I understand that you can’t completely get rid of negative thoughts in your life altogether, but you can certainly get rid of a lot of them.

You can absolutely get rid of a negative mindset. This is coming from someone who used to be the most negative person I ever knew in my life. I look back and I cringe at the way that I used to think in every situation. I was that person who was able to find the one bad, no matter how big or small it was. And I always voiced it.

I always thought that people deserved to know that it was not perfect, whatever the situation or thing was, and that was the completely wrong way of thinking because I was putting out bad energy and bad vibes into the world.

By doing that I was bringing other people down with me when really it was just my own insecurity and my own backwards way of thinking that was hurting me and causing me to be so negative.

I wanted to drag down other people with me but obviously I’m not like that anymore. Now I’m a positive person and I know how to handle the negativity when it does come up, because yes, it does still every so often.

How to be less negative

You become less negative by learning how to handle negativity in a healthy way. It’s not using your friends, partner or family as a dumping ground to let everything that’s bothering you off of your chest.

If they’re willing to listen for a minute then they can mentally prepare themselves for what negative words or negative vibes or feelings you’re about to give off. They can sit back and prepare themselves to protect their energy. When you do this, then you’re having a conversation. You’re not just complaining, you’re letting things out when the person listening is ready and open up and listen.

There are people out there, empaths who take on the emotions of others and really feel what it is others feel. I believe we all feel others emotions (vibes) to a certain extent and so when someone begins complaining to you and they’re not ready to hear then it can be very jolting.

When someone asks you for space or for a listening ear, it’s really such a kind service to you and they’re doing you a favour by not just dumping on you.

I have had people in the past and I used to be someone in the past where I would pick up my phone and I look at my messages and it would just be someone bitching and complaining and I could just feel my energy go straight down, no matter what mood I was in.

At the time I didn’t put two and two together and see how someone complaining or being negative could affect me so much.

If you can’t release your negative emotions such as worry, hate, frustration or fear onto someone else by talking then what else can you do? Because it’s not healthy to hold negative thoughts in either.

You need to release them somehow.

How to stop being so negative

One way to release is through speaking, but you can also journal as well. It can be as simple as sitting down and taking out your phone and writing in the notepad on your phone.

But I think it’s more powerful to physically write it out because the energy actually moves through your arm and onto the paper. It’s a way of transferring the negative energy out because when we hold negative thoughts in, when we tell ourselves, “No, I just have to be positive all the time, I can’t say anything negative,” then we’re holding that in and letting that bad energy build up.

This is when people explode. When it gets to the point that they can’t hold it in anymore and that’s not healthy either. Instead of putting your words onto other people, you can journal it out on paper or on your phone or if you really feel the need to just cry.

Can you tap back into that feeling of how you felt after you had a really good cry? Just after you were absolutely sobbing. Your face was soaked. How good did you feel after that? You felt relieved over whatever it was you were crying about, didn’t you?

Maybe you didn’t feel absolutely perfect and high vibe but you felt really good after cause you let something out. Crying is just one way to release things.

Another great way to release anything negative is EFT tapping. EFT, which stands for emotional freedom technique helps move energy through your body. I tap for everything ranging from money mindset to attracting love into my life, to anxiety over pretty much everything.

I’ve incorporated EFT tapping into my morning routine. I’ll wake up and do a little bit of journaling to see how I’m feeling and then look up a video for whatever it is that comes up. All of the EFT tapping I do is completely free. I find videos on YouTube, usually with Brad Yates, and within five to 10 minutes I feel like I’ve gone up at least a few notches in the happiness scale.

Even before I start my day, I get rid of all that junk, all those low vibes feelings, and start my day off 100% as high vibe and positive as I can.

I recognize that negative emotions are there and I do what I can to get rid of them myself first through EFT, journaling, or through a release such as crying before I go to a friend and dump on them. And when I do, I’ll ask them, “Hey, can I just talk to you for a second? I have something that’s bothering me. Will you please listen?” Then they’re there to support me.

Asking first is so important.

You can be a positive person while still having negative thoughts. Know that suppressing those negative emotions is probably the worst thing you can do because they have got to come out somehow, some way. If you continue to suppress them, they’re just going to continue dragging you down when you’re building yourself up.

Whether you’re releasing emotions through tapping, journaling, crying or talking to someone, remember, talking to a coach or therapist works too. It doesn’t necessarily have to be a friend, just anyone who will hold space for you.

However you let go and release your negative emotions, know that you are doing yourself a favour and it’s just leaving room for you to be more positive. Eventually those negative thoughts and emotions will fade away and you’ll be much happier, much more in joy and really live a frickin fabulous life.