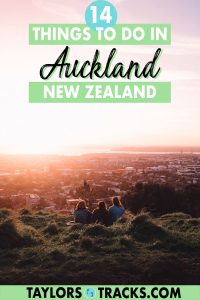 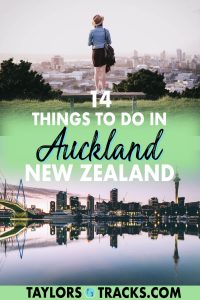 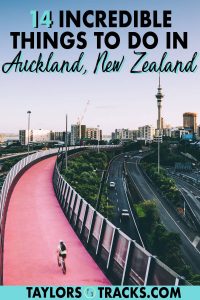 Many people tend to think Auckland is the capital of New Zealand, however that title is left to a different city, Wellington. Auckland is the most populated city in New Zealand and is known as “The City of Sails” due to its many harbours. The city is also home to over 50 volcanoes, some active, others extinct, as well as many islands and beaches formed by previous volcanoes. Most people start their New Zealand trip in Auckland and find themselves falling in love with this multicultural city. While most only plan a 1-2 day Auckland itinerary, with so many cool things to do in Auckland, you might just find yourself spending more time here than you expected.

Top things to do in Auckland

There are so many things to see in Auckland that give this city a little something for everyone. From activities that are thrilling to adventurous to relaxing and even educational, this city is one of the greatest cities in the world to visit for its wide variety of Auckland attractions.

Sightsee around Auckland on a harbour sailing cruise

As mentioned before, Auckland is known as the City of Sails, and cruising around one of the many harbours is definitely one of the top way do a bit of Auckland sightseeing. This cruise will take you around the Auckland Harbour for a unique perspective of some of the best Auckland tourist attractions such as the Sky Tower, the Harbour Bridge, and other iconic buildings as well as stunning islands. Your tour guide will be giving you interesting facts about the maritime history of Auckland as well as other fun facts about the city and its surrounding islands. You can even take a turn at steering the boat if you so choose!

You don’t have to wait until you get to Queenstown in order to experience heart-pumping activities. Skydiving is one of the top thrilling Auckland activities where you can choose to jump from several heights of either 9,000, 13000, 16000, or even 20000 feet. Hurl yourself out of an airplane with another human attached to your back and sore through the sky at up 200km an hour. Your breath will surely be taken away and not just from the speed. From above you will see both coastlines of the North Island as well as the rainforest, volcanoes, and islands.

One of the best things to do in Auckland is to climb Mount Eden, an old dormant volcano and offers beautiful, panoramic views of Auckland City, the harbour, and surrounding islands. There are an innumerable amount of trails to the summit of Mount Eden, some paved and some dirt. There is a great dog park on one side and sometimes an ice cream truck on the way to the top! At the top, there is a monument that has all the world’s top cities, which direction they are in, and how far away they are. This is an epic place to watch the sunrise as well as the sunset and it is even more of an epic place to watch the stars above while the city twinkles below. This one of the most amazing free things to do in Auckland, day or night and is open to the public at all times.

The Coast to Coast Walkway is another free Auckland must-do activity to experience the natural beauty of this city. Starting in Waitematā, you will hike 16km to Manukau. Throughout the walk, you will pass things that have historical significance to the Maori people as well as jaw-dropping scenery, native wildlife, and vibrant flora and fauna. You will go through Cornwall Park which has interesting native puriri trees and a kauri grove. Some people do this walk all in one shot and others break it up into 3 separate parts. The first is going from Auckland City to the Auckland Domain, the second going from Grafton to Maungakiekie, and the last part going from Cornwall Park to Manukau Harbour. This could also be an optional guided walk.

Wine lovers can rejoice, Waiheke Island, which is not far from Auckland, is the best tour from Auckland for anyone who loves wine. Waiheke is known for its world-class wineries and gorgeous scenery. This day tour from Auckland takes care of everything for you, so you can sit back and relax as you visit, tour, and taste your way around Waiheke Island. Your tour consists of 4 different wineries as well as lunch. You also will have free time to wander around and explore on your own. The ferry ride to and from the island is a trip in and of itself with gorgeous views of Rangitoto Island and Devonport.

The Auckland Sky Tower is one of the most iconic attractions in Auckland, towering over the city at 328 metres. There are three separate observation decks that you have access to, making it one of the best places to go in Auckland for incredible views. The Sky Deck sits at 220 metres, the main observation deck at 186 metres and the Sky Café at 182 metres, all for optimal views. The Sky Tower has several restaurants where you can wine and dine with the best view around town.

Get Your Auckland Sky Tower Ticket!

Head to sea on a whale and dolphin eco-cruise

Dolphins and whales are some of the most curious and playful sea creatures that make their home in Auckland. Joining an eco-cruise to see these magical creatures is one of the most fun activities to do in Auckland that you can also do sustainably, without harming the animals. This eco-cruise will take you on a gorgeous catamaran in search of orcas, also known as killer whales, and bottle-nosed dolphins. You will cruise around various islands in search of other species that make New Zealand coast their home and breeding grounds. What is unique and special about this tour is that it is a registered research vessel, meaning you can get up close and personal with a guide who has expert knowledge of these loveable creatures.

Hop on the ferry to Devonport

Devonport is a great little beach town just a short ferry ride from Auckland. Here you can find upscale shops, restaurants, cafes, boutiques, and bars. Devonport is especially known for its yummy fresh seafood that is finger-licking food. There are also beaches to relax on and old army barracks and tunnels to explore. You can walk to the top of the North Head Volcano or to the summit of Mount Victoria for a bit of physical adventure. Devonport has various beaches, some popular and others more secluded.

Get your heart pumping at the shark cage experience

Kelly Tarlton’s Aquarium is one of the best places to visit in Auckland, especially on a rainy day. This super special shark experience gets you up close and personal with the ocean’s most feared predators. Inside the Predator Tank at Kelly Tarlton’s you can snorkel with such species as the tiger and wobbegong sharks with only a mesh barrier between you and them. A video of your encounter is even included with your experience.

If swimming with sharks isn’t your thing, the rest of the Aquarium is just as thrilling and impressive. It features over 30 exhibits and 9 different zones. There is a shark tunnel you can walk through or a unique penguin enclosure to visit. The aquarium is also home to New Zealand’s largest collection of jellyfish, a turtle bay, and many tanks with creatures like seahorses, squid, octopus, and much more.

Book a Ticket to the Aquarium!

Chill out in the Auckland Botanical Gardens

The Botanical Garden in Auckland houses over 10,000 plants from all around the world and is one of the top attractions for tourists and locals alike. The Auckland Botanic Gardens host all sorts of events such as concerts, workshops, and plant sales. The Botanical Gardens sit on 64 hectares of land and can be explored by foot or a little tram car for an afternoon of relaxing and getting in touch with nature, even while still in a city.

Maori Culture is beautiful and fascinating and has a huge part in Auckland’s history. A cultural experience will take you to several historical sites of importance like One Tree Hill and Bastion Point. You get a chance to go through the heated gardens of Winterland that are over 100 years old before heading off to the Auckland Museum to see the traditional Haka dance performed. This tour comes with a professional guide who has expert knowledge of the Maori culture that will be shared along the way.

The entire history and culture of New Zealand is associated with the ocean and voyages. The Maritime Museum is a perfect way to learn just how important the sea is to the Maori culture. The museum showcases thousands and thousands of years of ocean voyage and how it shaped the world we live in today. There are also modern-day examples of boats such as the design for the America’s Cup yachting events.

Take a day trip from Auckland

Auckland lends itself as a fantastic base for exploring beyond the city. If your time in New Zealand is short or you’re not renting a car, then perhaps consider adding one or two of these top day trips from Auckland into your itinerary so you get to experience even more of this stunning country.

Some of the most popular day tours from Auckland include:

Auckland is one of the most visited cities in New Zealand and for good reason. It has the perfect mix of history, culture, contemporary and modern things to do. There are so many incredible things to do around Auckland that you’ll never get bored. Enjoy your visit to Auckland!