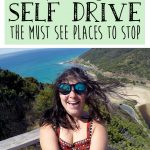 The Great Ocean road is one of the first things you’ll see advertised while in Melbourne. Signs for day tours from the city will litter travel agency windows and you’ll quickly wonder what all the hype is about. But first let me make it clear…that it is worth all of the hype. If you want to do an Australia road trip then you are looking at one of the best ones! And I’ve got the perfect Great Ocean road driving itinerary that is an add on for any Australia itinerary.

It’s a road that hugs the ocean, twisting and turning along the coast delivering you exceptional views of the water as you drive. It’s home to multiple national parks with hiking trails and beautiful natural scenery plus a range of history that can only be seen through the layers of rock formations.

However, if I were to give you one piece of advice it would be to not take a Great Ocean Road tour. They’re expensive, long days, spent mostly on a bus and you only get to see a fraction of what this beautiful area has to offer. So keep reading and I’ll show you some of the best suggestions of things to see during your Great Ocean Road trip. At the end you’ll find a some Great Ocean road trip planner tips. It’s easily considered one of the best things to do in Melbourne along with street art.

The Great Ocean Road is only one of many Australia road trips, the East Coast and West Coast also offer stunning views.

The Great Ocean Road itself stretches 243km from Torquay to Allansford. It lies between the major cities of Melbourne and Adelaide but is significantly closer to Melbourne with it being only about an hour and a half drive from the city to the start. It does make it a great drive if you plan on traveling from either of the two cities to the other!

I suggest renting a car for two days and heading off early (around 8am or earlier) to avoid tourist congestion at the best spots. If you’re on a tight budget there are always people offering to split the costs of a rental car or sometimes even just gas in Facebook groups like Australia Backpackers. Below are my suggestions for Great Ocean Road stops and I share my basic timeline itinerary.

Your first stop should be in Torquay, the first town along the Great Ocean Road that is known for its awesome surfing. Here is where the Rip Pro Curl surfing contest is held every year around Easter. Check it out just to watch some of the surfers tackle the waves.

In Lorne you’ll find a sneaky little lookout that’s off of the Great Ocean Road. Most lookouts you can easily spot from the road and pullover (which I highly encourage you to do at as many as possible) but Teddy’s Lookout you’ll find up a hill and down a residential road. It offers spectacular views over the Great Ocean Road from a height that you won’t find elsewhere along your drive. There is a dirt path that leads to a lower section where even less people go to.

Another stop in Lorne, Erskine Falls is well worth the little detour from the road. It’s a 30 metre waterfall in a lush forest that offers two lookouts. One from the top and one from the bottom. The bottom is absolutely worth the short walk down and up (approximately five minutes each way) where you can snap some Instagram-worthy pictures.

While I was doing research for the Great Ocean Road I read that there were some hot spots to find koalas. It made me determined to see one. The friend I was traveling with is Australian and warned me that it is rare to find wild koalas and to not get my hopes up. Luckily I spotted five during our entire road trip.

The best way to find them is to keep an eye out for the cars on the side of the road where people are just staring up into trees. Koalas like to sleep high and don’t move much so from a moving vehicle they can be a challenge to find.

Or you can visit one of the best places along the Great Ocean Road that is known for koala spotting. Kennett River is one of those places where I was lucky enough to spot two chilling in the trees while I ate my ice cream. It’s also a campground so it’s a good spot for a bathroom break.

Apollo Bay is a cute coastal town filled with restaurants and local shops along the bay. Quite often markets pop up and you will find amazing seafood here. It’s the perfect pit stop or place to stay for the night. I recommend Apollo Bay Echo YHA.

No Great Ocean Road trip is complete without a stop at the most famous spot along the road: the Twelve Apostles. Now it’s closer to eight depending on if you count the one that has fallen but still has a bit of the base. They’re limestone stacks just off the shore of a cliff that gives you views that seem out of this world.

My personal favorite stop of the trip were the Gibson steps. They’re nothing spectacular but lead you down the side of the cliff (don’t worry the steps are more than safe) to the beach. It’s not a beach to relax on but is a place to watch how powerful the waves are and to get a glimpse of just how immense the apostles are from the ground up.

Named after a shipwreck in the area from the 1870’s that was journeying from England, this spot will lead you on trails throughout the area. You can walk down to the beach where people choose to catch some rays and admire the sheer size of the cliffs around you. From here you’ll find paths to the Razorback and Thunder Cave, both incredible to see the size of. Lastly check out Muttonbird Island, the home to short-tailed shearwater birds from October to April who travel 30,000km each year as their migration route.

A quick stop, the Arch is a naturally formed archway from the rocks surrounded by crashing waves.

Famously named after the London Bridge when a part of the arch collapsed in January 1990 leaving two tourists stranded on the section that was no longer attached to the mainland. Luckily they were rescued by helicopter a few hours later.

To put it simply, the Grotto is basically a sinkhole. But it’s a beautiful sinkhole. Try to get in here before too many tourists do and you’ll be able to snap some incredible pictures. Please be respectful while you’re here and don’t do as other tourists do. Stay in the walled area to take your picture, don’t go into the hole and don’t go sit on the edge by the water. You will endanger yourself and ruin other tourists pictures!

DAY ONE: Starting from Melbourne, head out early in the morning. You’ll make it to Torquay before 10AM if you leave at 8AM. Take your time, you’ll be able to see the following before a late lunch:

If you need to grab breakfast I recommend getting it in Melbourne or you’ll be waiting about 2 hours to pick some food up in either Torquay or Anglesea. Stop for the day in Apollo Bay where you can spend the afternoon exploring the small town, relaxing on the beach, or heading out for a hike. I recommend you stay in Apollo Bay because it is cheaper than Port Campbell and offers a wider selection of hostels, hotels, and things to do. Though Port Campbell now has a hostel open!

DAY TWO: Once again you’ll want to take off early in the morning. The earlier the better to avoid the mass of tourists as the itinerary for day two consists of the most popular spots along the Great Ocean Road. If you’re really eager the first stop is unreal for sunrises. You’ll see:

It will be a 45 minute to hours drive to get to the Twelve Apostles which will also be the busiest. The rest are all relatively close, all within 20km total. Though the Gibson Steps will be the first thing you see, save them for later in the day because they are okay to do even when there are lots of people around because there is more space.

Stop for breakfast in Port Campbell at one of the small cafes on the main street before you start your day. Then you can grab lunch on the way back to Melbourne. It will be a long day drive day as you’ll be driving the entire distance back to Melbourne. However, I recommend this itinerary and timing so that you can see the best parts at an optimal time.

The Great Ocean Road drive is simply stunning and offers you the best views of the scenery and is considered one of the great Australian road trips. You can’t go wrong giving it a go on your own!