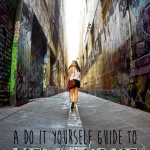 Melbourne is known for its famous street art and you will find no shortage of it here. The city center is filled with ever changing walls that lead you down a pathway of color and creativity. It’s a must-do during any Australia trip.

You’ll find some graffiti throughout the city but the most you’ll see is really art. You may even spot some sneaky Banksy street art. The walls that you’ll see on this street art tour are free for artists to create as many of the building owners purchase a license from the government that allows them to paint.

I have listed the lanes in the order which you should see them, guiding you through the city from Flinders Lane to the top of the city center. You’ll explore the most known Melbourne laneways not just for street art but also cafes.

Just off of Flinders Lane you’ll find the first stop. This lane is, as the name of it obviously states, covered with art influenced by ACDC and the love of rock n’ roll. It takes influence from other musicians as well, including Prince and is home to the famous Cherry Bar, a venue for live music.

Make your way over to see some Hosier Lane street art, the most famous street art laneway in the city. Here is where you’ll have your best luck spotting an artist putting up a new piece.

Just off of Hosier Lane you’ll find a laneway lined with decorated dumpsters that are too covered in as much street art as the walls. They make for a surprisingly good backdrop in a picture!

Not known so much for its street art, Degraves Street is home to a popular set of cafes and restaurants. But tucked around a corner about half way down the street you’ll find a vibrant piece of street art and I easily consider my favorite.

Across from Degraves street is the darkened laneway of Centre Place. Packed during the day with funky cafes that have small stools spilling out onto the street, it has a bit of street art at the very end. But if you happen to stop by after 4PM when the stools are tucked away and the metal doors have come down, the once bustling laneway becomes filled with street art.

Now halfway through the tour and making your way up more into the city center is Union Lane. No shops or cafes line this laneway though, it’s used mostly as a quick shortcut for locals but is packed with colorful street art.

It may not be packed with colorful pieces like Union Lane, but Caledonian Lane is a sunny stroll by some still loveable art.

Tucked away on the edge of China town is Tattersalls Lane where you’ll find a few good spots for some afternoon drinks and street art spotting.

Just off of Tattersalls Lane is where you’ll find the best bunch of street of in the area. You’ll notice it all by Section 8 Bar that has even more street art in it!

Drewery Lane is a little bit of a refreshment from all of the other street art. Here you’ll find mosaics decorating the walls.

And lastly we’ll end with Sniders Lane that’s just off of Drewery Lane. It’s home to one large piece at the very end which is pictured below.

The easiest and most known street art is found within the CBD (what Australian’s call downtown or the city center). But you can also find beautiful and amazingly detailed, large pieces in Fitzroy and Collingwood. Both are areas directly beside each other just outside of the CBD if you wish to continue your DIY street art tour.

Fitzroy is known for its art scene and is the third most hipster area in the world…so I’ve been told. But I believe it! Some of the pieces you’ll find in Fitzroy were even commissioned. Talk about some recognition for street artists!

Street art in Melbourne is not hard to come by, but sometimes the best ones are hidden down laneways you can easily miss walking by. Write down this list of laneways, open up Google Maps and you’ll find yourself exploring some of the best street art in the city for an hour or two.