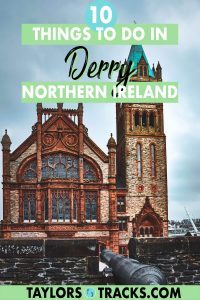 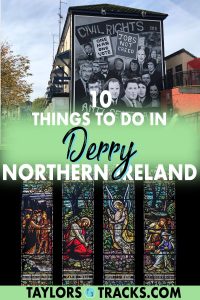 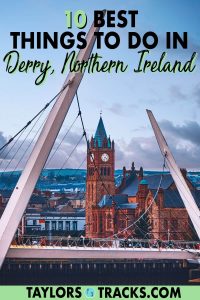 Derry, which is still known by some as Londonderry, is the second-largest city in Northern Ireland and a delightful place to visit. Home to an incredible amount of history and tales of The Troubles, this walled city speaks volumes about peace and reconciliation. Not to mention it’s full of the much-loved Irish charm with spectacular scenery and wonderful character on every corner!

Whether you’re into art, culture, food and drink, or the great outdoors, there are so many things to do in Derry for all of its visitors. So, if you’re going to Derry on your next trip to Ireland, this handy guide should give you some pointers on the best places to go when you’re there.

Top things to do in Derry

Derry is full of excellent tourist spots, hidden gems, and outdoor spaces, each of them perfect for a visitor’s to-do list!

Learn about Bloody Sunday and the Bogside Murals

Much like Belfast, it’s essential to learn about Derry’s history to truly grasp and understand this city. A guided walking tour will take you through one of the most historically important areas of the city. You’ll learn about Derry’s modern history, such as the partition of Ireland, the creation of the 6-country state, the discrimination against Irish Catholics, the 1969 Battle of Bogside, and more.

During your tour, you’ll go to Bogside to see the Bogside Murals and to the site of the Bloody Sunday massacre of 1972. Your guide will cover the inquiries into the infamous Bloody Sunday and the conflict that came about afterward.

See the views from the Derry Walls

Did you know that Derry is one of the best examples of a walled city in the whole of Europe? And it’s the only fully-intact walled city in Ireland. With that in mind, visiting the City Walls truly is one of the top things to do in Derry. To make the most of seeing the Derry Walls, do either the dry moat walk (this is said to be the best!) or the rampant top walk. Download this guide to take with you – it will tell you everything you need to know about the walls and will help you get your bearings.

This is one of the most important things to see in Derry, so it’s highly recommended that you add it to your list of must-see Derry attractions.

The Free Derry Corner is one of the most recognizable landmarks in the city and is an absolute must-see attraction. Located in Bogside, it’s a free-standing gable wall that reads: YOU ARE NOW ENTERING FREE DERRY.

It’s said that in 1969 John ‘Caker’ Casey, a local civil rights activist, sprayed graffiti on a gable wall at the end of a row of terraced houses to read the same words. In the same year, when Jim Callaghan, the British Home Secretary, visited Derry, the wall was painted white and the words were re-painted in black lettering. The houses were later demolished, but the wall was kept in-tact and you can still see it today in the central reservation of Lecky Road. Not far from here you can also visit the Museum of Free Derry to learn about the history at your own pace.

Derry Girls has been a huge hit on our small screens and, if you haven’t seen it yet, it’s a hilarious and poignant comedy about 5 teenagers living in Derry during The Troubles. Naturally, Derry Girls was filmed in… you guessed it… Derry! That means you can visit the filming locations while you’re there, including Bishop’s Gate, Long Tower Church, Dennis Wee Shop, and the place where Bill Clinton addressed the people of Derry in 1995. You’ll also be taken to the new mural featuring everyone’s favourite Derry Girls (and Derry boy) – a huge painting depicting Erin, Orla, Michelle, Clare and James. As well as visiting the Derry Girls filming locations, you’ll also get to learn more about Derry’s history and landmarks on this tour.

The 235 metre-long and 4 metre-wide Peace Bridge takes you over the River Foyle and connects Ebrington Square with the city centre. A walk across this bridge is definitely one of the best things to do in Derry city when you want to relax for a while. The eagle-eyed amongst you may notice that the 2 arms of the bridge are pointing in different directions. This is because it symbolizes the Protestant Waterside and Catholic Bogside communities being united after 400 years of conflict.

This popular Derry tourist attraction is within the walled city and is definitely something to add to your list of things to do if you want to take in the culture of the area. At this museum, there are 2 permanent exhibitions: An Armada Shipwreck (the story of one the Spanish Armada’s largest ships which sank in 1588 off the Donegal coast) and The Story of Derry. Here, there’s an open-air viewing area where you’ll get panoramic views of Derry and the River Foyle.

Grab a pint at the Walled City Brewery

While visiting Ireland it’s important that you enjoy the pub culture as much as you can, and of course try all of the different kinds of beer. At the Walled City Brewery, you can do a 1.5 hour interactive ‘Beer Masterclass’ where you can taste 10 of the brewery’s craft beers which have been paired with local artisan snacks. During this experience, the brewers will tell you all you need to know about brewing beer too. Walled City Brewery is also the first restaurant in Northern Ireland to have a restaurant in the same building, so you can dine there, too.

Check out the Craft Village

There are plenty of quaint places to visit in Derry and The Craft Village is certainly one of them. This is a shopping district that is home to all kinds of stores, including artisan craft shops, book shops, coffee shops, and more. Escape the bustle of the city and take in this Dickensian-esque area at your own pace.

The majestic St Columb’s Cathedral was built between 1628 and 1633, making it the oldest building in Derry. This neo-Gothic building has recently been restored and, inside, you can learn more about it and its history through an audiovisual display. The Chapel House Museum houses fascinating artifacts from the 1689 Siege of Londonderry and you can visit free of charge.

Swing by the Guildhall

The Guildhall is one of Derry’s most beautiful buildings. The neo-gothic building that was built in 1877 stands tall just outside of the city walls, close to the Peace Bridge and welcomes visitors to Derry with exhibitions, a tourism information point, a cafe and cultural spaces to explore.

With these things to do in Derry you’re bound to make the most of your time here. Enjoy your trip to Derry!

How many days do you need in Derry?

1-2 days in Derry will suffice. A day will certainly show you the highlights, but 2 days in Derry will allow you to explore at a more relaxed pace and perhaps dive deeper into this city’s rough past on a Bogside History Tour where details that aren’t covered in your typical city tour are explained.

Where to Stay in Derry

The Derry city centre is the place to be and has the most accommodation options. Derry is relatively small so nothing in the town itself is further than a 15-20 minute walk at most. A few of the best places to stay in Derry include: