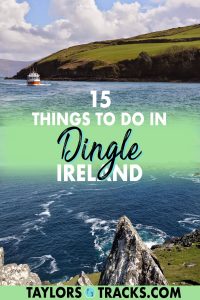 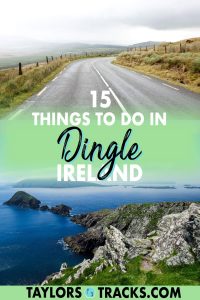 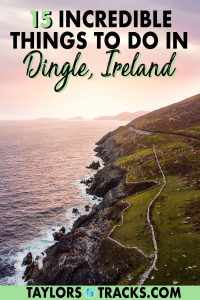 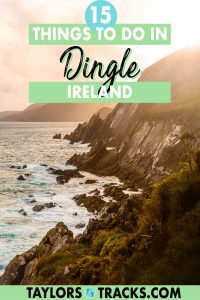 On the edge of the stunning County Kerry, Dingle is a beautiful town nestled on the Dingle Peninsula. During your next trip to Ireland, don’t miss the chance to visit this charming town and the scenic sights that surround it.

On the Atlantic coast, Dingle is a place of spectacular scenery, a curious history, excellent food, drink, and exciting activities to boot. The town was once dubbed ‘the most beautiful place on Earth’ by National Geographic Traveller, a telling accolade that sums up Dingle’s charm.

Top Things to Do in Dingle

Dingle is a quaint Irish town that won’t leave you disappointed. There are plenty of things to do in Dingle for everyone, from foodies to nature lovers and for those who love to dive into the culture of the place they’re in.

You can take a peek behind the curtains with a tour of the distillery, where you’ll find out about the history of Irish whiskey production, the distillation process, and the Dingle Distillery production facility. Plus, you’ll get to taste the produce!

Or, you can choose The Dingle Whiskey Experience which is an awesome opportunity to learn more about the whiskey-making process, focusing on malt whiskey and pot whiskey. With this experience, you’ll get to taste Dingle Distillery’s new spirit, as well as 4 mature whiskeys.

Traditional music and dancing is a must-do activity in Dingle – well, in any Irish town, actually. O’Flaherty’s Bar is home to incredible traditional Irish music sessions, led by Fergus Ó’Flaithbheartaigh and other musicians.

The bar itself still has the original flagstones from the 1860s and the walls are adorned with historical photos, memorabilia, and more, all documenting Dingle’s story. Whether you’re dancing or watching from the sidelines, this will be a brilliant night out and is definitely one of the best things to do in Dingle.

One of the most popular Dingle tourist attractions, Fahan Beehive Huts is a must on the itinerary for Dingle.

You probably won’t see any bees at the beehive huts, as these huts are very old, cone-shaped houses that are built without mortar. No one really knows how old these buildings are, but they’re estimated to have been built between the 8th and 12th centuries AD.

It’s said that hermit monks most likely lived in the huts, as well as Pagans and followers of Saint Peter. There used to be 400 of these buildings dotted around the Dingle Peninsula, with many of them disappearing over time, but there are still lots of them to visit today.

Have you ever heard of Fungie the Dingle dolphin? He’s something of a celebrity in the local waters! Fungie is a bottlenose dolphin who can often be found between Dingle Harbour and the lighthouse.  He’s the world’s longest known resident wild dolphin and has been bringing joy to Dingle for over 30 years.

You may spot Fungie on a Dingle boat tour, which is one of the best things to do in Dingle as a boat tour will take you to explore the gorgeous coastline of the local area. You can choose from sea fishing trips, tours of the Blasket Islands, and more.

You can do tours specific to seeing Fungie with Dingle Boat Tours, too. And don’t worry, if Fungie isn’t around you get your money back. Fungie actually went missing for a while, but was recently spotted again, much to the delight of Dingle residents and visitors!

For a mini Ireland road trip, take the scenic Conor Pass that stretches 12km between Dingle town and Kilmore Cross. This short but extra sweet drive is one of the highest mountains passes in Ireland and delivers exceptional views over the Dingle Peninsula and the Wild Atlantic Way. This drive isn’t for the light-hearted though, some parts of the road are so narrow two cars can’t pass so keep your eyes peeled!

Now Ireland may not seem like an optimal destination to try ice cream, with typically cold, rainy weather, but it’s important that you make an exception for Murphy’s Ice Cream. Located on Strand Street, you’ll find quite a few unique and classic flavours that will tantalize your tastebuds. Murphy’s also has excellent coffee and if you miss it in Dingle, there’s also a location in Killarney (though it’s recommended you visit both so you can try as many flavours as possible).

7. Try the best seafood at The Fish Box

Like many coastal towns, a trip to Dingle isn’t complete without trying the local seafood. The Fish Box is a delightful eatery which is family owned and run and sells the most delicious seafood. The family catches its prawns, monkfish, hake, cod, haddock, sole, plaice, and cuttlefish on its own boat: Cú Na Mara.

The eco-warriors amongst you will be pleased to know that The Fish Box uses fully-compostable takeaway containers, supports a sustainable supply chain, and only uses produce from local artisan businesses.

Over 1,000 years old, Gallarus Oratory is said to be one of the earliest Christian churches. Some also say that it could be a shelter for people on pilgrimages, a burial place, or a 12th-century chapel.

No one knows the exact origins of Gallus Oratory, but it’s very likely that it was built over a grave. It’s made entirely from dry stone masonry and is around 16 ft long and 10 ft wide. When you visit, you can go inside but because there’s only one small window, expect it to be quite dark!

A visit to Gallarus Oratory will also bring you breathtaking views of the surrounding area, including Smerwick Harbour, the Three Sisters, and Mount Brandon.

9. See the best sights on a Dingle Peninsula tour

If you’re looking for things to do in Dingle Peninsula, a guided tour has to be one of the best options.

This Dingle tour will take you to some outstanding sites on the Dingle Peninsula, Ireland. You’ll get to see:

This tour is a brilliant (and really convenient!) way to see the sights of the Dingle Peninsula and your tour guide will pick you up and drop you off.

10. Take in the scenery on the Slea Head Drive

Slea Head Drive is one of the best things to do in Dingle, hands down, if you’ve hired a car.

This is one of the top scenic routes in Ireland, and it will take you to some fascinating places, including Irish speaking villages, and film locations, and gives you incredible views of the Blasket Islands and faraway views of the distant Skellig Islands. Slea Head Drive starts and finishes in Dingle and makes up part of the Wild Atlantic Way.

Harry Clarke was a stained glass artist from Dublin and in 1924, Clarke finished his stained glass artwork in the Díseart in Dingle, commissioned by the Superior Mother, Ita Macken, of the Presentation order.

Nearly 100 years later, his work is still there and you can visit it at the Díseart Centre of Irish Spirituality and Culture.

Harry Clarke designed and painted 12 stained glass lancet windows to depict different parts of the life of Jesus Christ. His completed work at Díseart displays, The Visit of the Magi, The Baptism of Jesus, Let the Little Children Come to Me, The Sermon on the Mount, The Agony in the Garden, and Jesus Appears to Mary Magdalene.

The stained glass windows are absolutely striking so, if you can visit them during your trip, it’s highly recommended that you do.

Inch Beach (or Inch Strand) is a long sand spit that reaches into Dingle Bay and is a Blue Flag beach, meaning that it has been awarded the Blue Flag certification by the Foundation for Environmental Education.

Inch Beach is one of the best Dingle attractions in the warmer months because it’s awesome for surfing, swimming, and angling. You can hire wetsuits and water sports equipment at the beach, too.

If you’re visiting during the colder times of the year, don’t worry. You’ll still be treated to magnificent coastline views and a great opportunity to stretch your legs and watch a beautiful sunrise or sunset.

Eask Tower, a spectacular stone building dating back to 1847, is 600 ft above sea level, giving you amazing views of Dingle Harbour and Dingle Peninsula. The original tower was 27 ft tall but bits were added during and it’s now 35 ft tall.

The construction of Eask Tower gave work to local people during the Great Famine. You’ll see that the tower has a wooden fingerpost to let sailors know to let their sails down as they come into the blind harbour.

What better way to get to know a new town than on foot? You can take a historic tour of Dingle (they start at the Fungie statue!), led by tour guides who know all the best places to visit in Dingle because… they were born and raised in Dingle.

These historic walking tours will take you to all of the important Dingle sightseeing spots, local characters, and some of the 60+ – yes, you read that right, 60+! – pubs in the town.

St James’ Church is a lovely building that dates back to the 13th century. It has a rich history, being the home of the Treaty of Dingle signing in 1529, between the Earl of Desmond, James Fitzgerald, and the envoy of the Holy Roman Emperor, Charles V, King of Spain.

Within the 2-acre grounds is a graveyard with tombstones of interest, including the resting place of John Fitzgerald, Knight of Kerry, who died in 1741.

As well as being a historical building and a functional place of worship, the church also holds events, exhibitions, lectures, traditional and folk music concerts, and more.

This is an awesome place to visit. With so many exciting things to do in Dingle, Ireland, we know you’ll have an excellent time when you’re there. Enjoy your trip!

How many days do you need in Dingle?

2 days in Dingle is ideal and recommended. It can be done in a single day but it may be rushed!

Where to Stay in Dingle