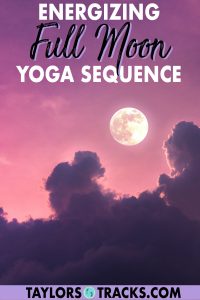 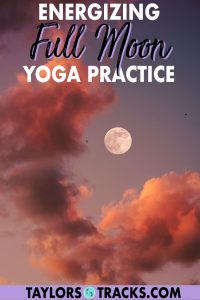 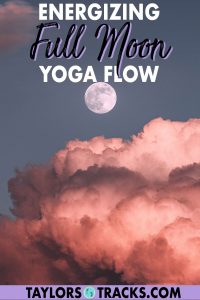 Feeling a little intense? Or like things are building up? That could be because of the full moon! The full moon brings out a lot of emotions that have built up over the lunar cycle that are waiting to be released. Full moons are a powerful time for letting go, releasing, and getting back to yourself, grounded, relaxed, and at ease.

A full moon yoga flow can help you release, let go and ground, using movement as the key tool that gets energy unblocked, flowing, and out of your body (and head!). Get ready to embrace the full moon with this energizing yoga sequence!

What are the benefits of a full moon?

The full moon in the lunar cycle is a time when energy is heightened, the sky is bright, and the moon is at its most powerful. As humans, we can feel the effects of the moon cycle and it’s during a full moon that we often feel our most powerful.

While the new moon represents new beginnings and is a great time for reflection and setting new intentions, a full moon is about letting go, releasing, and also reflecting on what has built up and we no longer want in our lives. Around full moons is when people most often feel tense, like things are out of control, or other emotions, all heightened. This is no coincidence, but instead of trying to push them away, use the benefits of the full moon. The moon is helping to point you to which areas in your life that you need to work on.

Take that information, reflect on it, and get real with yourself on where or what you need to let go of. This could be emotions, limiting beliefs, thoughts, people, ideas, standards you hold yourself to, or even stories you’ve created in your head.

When you work with the energy of the full moon it will feel intense but it will also make things extra clear to you, so don’t pass up on this time to use and embrace this powerful energy. I recommend doing a full moon ritual, one in which you can incorporate yoga, to help you release stuck emotions in your body.

READ MORE: How to Create Your Own Full Moon Ritual

What is moon yoga?

Moon yoga is not necessarily a term itself but is more commonly used to describe yoga that is practiced in combination with the moon, whether it be a new moon or full moon. Moon salutations, Chandra Namaskara, are a term recognized in yoga. Like sun salutations, moon salutations are a sequence of poses, typically is a set order for each sequence.

It’s not necessary to only practice a sun or moon salutation at the right time of day. The thing that is most important is to practice either when feels good for you and for your body.

Should you do yoga on a full moon?

If you’re following a traditional Ashtanga yoga practice, then no, you may not want to practice yoga on a full moon. However, there is no harm in practicing yoga during a full moon, that’s what makes yoga such a great practice, you can do it and adapt it to pretty much everything!

Personally, I think practicing yoga during a full moon is a really great idea. Since the energy around the planet is heightened, if you’re in touch with your own energy, you’ll likely feel more intense too. Getting into some movement will help you to move through that intensity and out of your head, as it’s often during the full moon that people are their most headstrong.

Join me in a full moon yoga practice that allows you to harness your energy, release what no longer serves you, and move through a powerful sequence while you’re feeling the intensity of this time. This 35-minute sequence will leave you feeling grounded, lighter, and stronger.

The only props you may want other than yourself and your mat is a block or a thick book, depending on your yoga practice, flexibility, and balance. Happy full moon!

Other Ways to Embrace the Moon Cycle & Astrology