This post contains affiliate links which I earn a small commission from and are at no additional cost to you. See my disclosure policy for details. 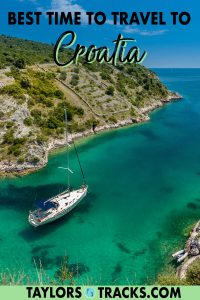 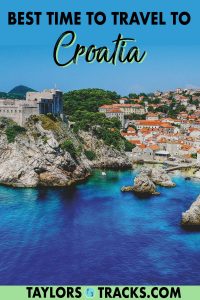 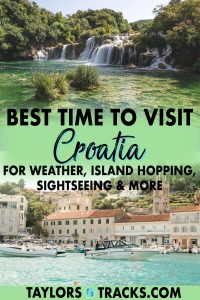 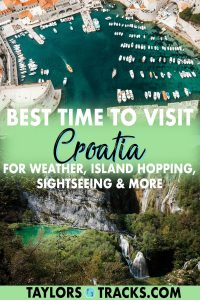 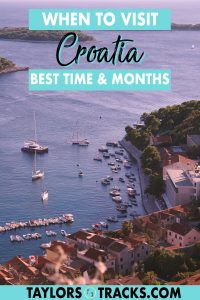 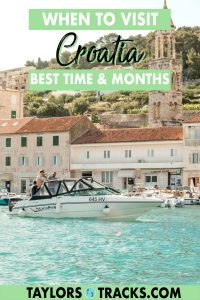 Croatia has been a hotspot on the map of popular European tourist destinations for many years now, and it’s a truly wonderful place to visit for its stunning blue waters, island hopping, and old towns that were a backdrop for films, TV, and tourist pictures alike.

The time of year that you take your Croatia vacation will depend on all kinds of different things, and it can be tricky to choose a month or a season sometimes, especially when you’re going somewhere that has areas that lovely all year round.

To help you out, we’ve written this guide outlining the best time of year to go to Croatia based on factors that can affect your trip.

Whenever you choose to go to Croatia depends on your personal preferences, but there are some things that you may wish to consider. Weather, expenses, and crowds can all have an impact on your trip.

Croatia is a country in the Balkans and its weather is mild.

Like most places in the northern hemisphere, Croatia is generally warm and dry in the summer and cool in the winter, but the climate differs from place to place throughout the country.

The closer you are to the Adriatic Sea, the warmer you’ll be. For example, some of Croatia’s most popular cities such as Dubrovnik, Split, and Zadar, are on the coast, so you can expect a typical Mediterranean climate there. While in the capital, Zagreb, which in inland you can expect snow in the winter but hot summers.

The coldest months of the year are January and February, which have temperatures with highs of 10°С and lows of 2°С. On average, December is the rainiest month, with 80mm of rain and 13 rainy days.

Those who have a tight budget will benefit from going to Croatia outside of the high season. The high season is June, July, and August, when North American and European schools break for the summer.

If you travel during the shoulder seasons (the months before and after the high season) in May and September, you’ll be able to benefit from cheaper flights and accommodation, as well as having the possibility that prices will be lower at attractions and eateries.

Prices can really shoot up in December over the Christmas period, as this is when people travel to see their family or take Christmas vacations, so avoiding these times can help you save some pennies.

So, the best time to travel to Croatia on a budget is either during the months of May or September, or anywhere outside of June, July, August, and December.

The best months enjoy all that Croatia has to offer while still avoiding crowds are likely to be May and September. These are the shoulder seasons and they offer you the best of both worlds. You’ll still get to enjoy the weather and events that are available, but there will be fewer people around and prices are often cheaper!

Croatia has some great festivals, many of which are held in the months of July and August, so be aware that there can be even larger crowds than typical summer tourists.

The school holidays, which are usually from mid-July to early September, over the Christmas and Easter periods, in October, and in February, can be incredibly busy times to travel to Croatia, too.

Croatia is popular for its island-hopping holidays, which is hardly surprising considering the islands and the surrounding waters are so beautiful.

While it may be a touch on the busy side, the best time to travel to Croatia to go island hopping is the summertime, such as July and August. This is because the weather is warmer, the sea is warmer, and the ferries are more active.

The ferries that can take you from island to island will often have reduced schedules out of peak times, so it can be much easier to island-hop during the summer.

If you really want to avoid the crowds, try going in June or September instead. However, some accommodations, restaurants, clubs, and bars close in the autumn (typically mid-end of September), so we don’t recommend island hopping during the autumn or winter months.

READ MORE: 11 Best Islands in Croatia for a Scenic Visit

There are a great many much-loved beaches in Croatia, such as the most famous beach in all of Croatia, Zlatni Rat Beach in Bol, and Banje in Dubrovnik.

The beaches can get super busy during the peak beach seasons (May-September), but that’s not necessarily a bad thing! If you want to avoid the hustle and bustle, you’ll still get warm weather and sea temperatures at the beaches in April and October too.

The Adriatic Sea is generally warm, apart from during the winter, so swimming when you go to the beach should be on the cards, especially if you go during the warmer summer months.

Croatia is known for its stunning national parks, and spring is a great time to visit them because of the foliage and wildlife that comes to life during that season. If you like hiking, visiting the national parks in spring or early autumn can be perfect because the weather is nice, but it won’t be too hot.

There are a number of popular destinations for tourists in Croatia, including Split and Dubrovnik. Split is Croatia’s second-largest city and is on the Dalmation coast. The best time to visit Split for activities and events is the peak season, but you can actually enjoy what this city has to offer all year round. One of Split’s most popular events is the Split summer festival, which is held in July, and has been running since 1954!

Dubrovnik is perhaps the most famous destination in Croatia, popular with tourists, it’s listed as a UNESCO world heritage site. It has around 2,900 hours of sunshine every year, making Dubrovnik a wonderful place to go if you like to catch rays. With that in mind, we think that the best time to visit Dubrovnik is in the spring and summer months, from April to August, as you’ll see some of the best of nature, as well as experiencing awesome weather.

Croatia is also known for its music festivals, including Hideout Festival (June), Suncebeat Festival (July), and Defected Croatia (August). These music festivals are loved by both visitors and locals and bring music lovers to the country from far and wide.

There isn’t really a bad time to go to Zagreb, the main city to go to that’s inland, but there are some key events that tourists like to attend, such as Dance Week Festival, We Love Sound music festival, and Zagreb Pride, all of which are held in June.

Croatia isn’t a place of extreme weather, but you can expect four distinct seasons, with hot summers and much cooler winters.

The summer months are the best time to go to Croatia weather-wise, with July and August being the warmest.

This is the high season and is definitely the best time for sun-seekers to take a vacation to Croatia.

You’ll still get hot weather when you visit Croatia in the autumn. In fact, you can expect averages of 25°С in September and sea temperatures of 24°С. October has temperature averages of 21°С and 20°С for the sea.

In November, the temperature drops dramatically, with averages of 14°С and the sea at around 17°С. Early autumn can be an awesome time to visit because it’s still warm, but it’s not scorching hot like it can be in the summer.

Spring is when you can start to see temperatures rise again. In March, the average temperature during the day is around 13°С, in April it’s 17°С, and in May it’s 23°С.

May is when temperatures really start to get high again and the sea temperature will be around 19°С, so this can be a great time to visit.

When is the best time to go to Croatia?

After taking into consideration everything above, the best month to visit Croatia is June. Other brilliant months to go are May and September (when I personally went and loved). In May and September you can expect fewer crowds and lower prices, but still get warm weather.

If you don’t mind a bit of busyness, going to Croatia in July and August could be a great option for you, especially if you enjoy the hot weather or want to go island hopping. The summer is also a brilliant time to visit Croatia as it’s music festival season. There are some awesome music festivals in the country, but we recommend booking early to avoid disappointment.

Visiting cities such as Zagreb, Split, and Dubrovnik is great throughout the year and you should find that most attractions are open. However, in parts of the low season, bars, restaurants, and clubs close on the islands, even the most popular ones such as Hvar, Brac, and Korcula, so it’s far from an ideal time to go island hopping.

When is the best time to visit Croatia and Slovenia?

Croatia and Slovenia are neighbouring countries and are similar in climate, although Slovenia is a little cooler. The best time to visit Slovenia and Croatia are May and September, the shoulder seasons. Visiting during these months means that you get ideal weather without it being too hot or cold, fewer crowds are around, and prices are typically lower for flights and accommodation. September is your best bet if you want to see fall foliage, especially in hot spots such as Lake Bled in Slovenia, and Plitvice Lakes National Park in Croatia.

Enjoy your visit to Croatia, make sure to give yourself plenty of time, there’s so much to see and do!