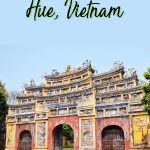 Hue is often a city overlooked by many travellers making their way through Vietnam. It’s unfortunate as this central city is a small yet stunning city to stop in along the Perfume River. It was the capital of Vietnam for 143 years (1802–1945) where Emperors lived. Today you can walk through their residences and see the historic ruins that are being restored as one of the main things to in Hue. In the state that they are currently in there is a sense of calm and beauty.

History is simply everywhere you look in Hue from tombs to the tallest pagoda in Vietnam, Hue is one city that is worth adding to your Vietnam itinerary, history buff or not because Hue is a Vietnam must see. Keep reading, I cover what to do in Hue, things to see in Hue and where to stay.

Things to do in Hue Vietnam

Find what to see in Hue for a 1-2 day stop in this historic city and the top attractions in Hue. Many of the most historic things to do in Vietnam are here.

The Imperial City, also known as The Citadel, is where you can start your Hue sightseeing. The Imperial City is a walled city where Vietnam’s Emperors lived with thick stone walls surrounding the interior buildings. It has been damaged from battles but restoration is ongoing. Inside you can see the buildings both damaged and restored with intricate details. I recommend picking up a guide that explains what each building is. The entire city is surrounded by a gorgeous moat filled with water lilies.

Pro tip: Make sure you head to the right gate! There is only one way to enter.

The Hai Van Pass is a route along Vietnam’s coastline that winds up and over a mountain. It’s one of the best things to do in Hue and it’s incredibly popular because of its incredible views of the coast. Many who are motorbiking across the country take this route but if you’re not you can always opt for the option of having a local drive you which is very common to do from Hue.

The road is known for being quite dangerous, with sharp curves that make it difficult to see oncoming traffic, heavy fog and even cows on the road! However, it is still widely driven. If you’re driving there is also the option to take the Hai Van tunnel which was built to make the pass safer. You can also do it the opposite way from Hoi An to Hue.

Hue attractions are plenty, but this is one of the top sites. Thien Mu Pagoda is translated to Pagoda of the Celestial Lady, it stands 7 stories tall along the Perfume River on Ha Khe Hill and is one of the best things to see in Hue. It is the tallest religious building in Vietnam and is considered the unofficial symbol of Hue. The temple was established in 1601 but the pagoda wasn’t built until 1844.

The grounds around Thien Mu Pagoda are beautiful to see but this site also holds political significance. When the Catholic government in the 1960’s decided to ‘crack down’ on Buddhists this was the place where Buddhists would meet after 9 were shot in Hue.

Thanh Toan Bridge, also known as the Japanese Bridge, was originally built between 1740 and 1746 to help transportation to and from the town that lies on the opposite side of the river. It was named after the Japanese Bridge in Hoi An because of its resemblance. Its building was initiated by Tran Thi Dao, the wife of a Mandarin in the Emperor’s court at the time. Today an alter has been erected on the bridge for Tran Thi Dao and many people still cross the bridge to see her tomb.

Tombs of the Emperors

One of the top things to see in Hue are one or more of the tombs. In total there are 7 tombs scattered around Hue’s countryside that house the Emperor’s from the Nguyen dynasty period. The tombs were designed and built during each Emperor’s lifetime and are monuments for 9 of the 13 ruling Emperor’s of the time. The most popular tombs to visit are Minh Mang, Tu Duc and Khai Dinh.

Photography lovers and explorers will want to venture here. Ho Thuy Tien is a small lake were an abandoned water park sites. It was abandoned in 2004 and is currently still open. It’s quite unique with a large dragon wrapping around a dome shape (dragons are quite important in Vietnamese history) that used to be an aquarium. You can talk around and explore the glass tunnel that once housed fish and crocodiles and get some really cool Instagram-worthy pictures.

Recently some people have been denied entry due to safety but many still get though and it has become well known spots for both locals and visitors to Hue.

Dong Ba Market is the largest market in Central Vietnam and is the perfect spot to see local life. The market is huge selling goods that range from jewelry to food, typical souvenirs and more. There are food courts where you can grab lunch or head up to the second floor to take a peek at clothing.

Just a brief walk away from the Imperial City you’ll find the Hue Provincial Museum. Though it is in desperate need of some maintenance if you enjoy history you can enter for only $1 to see the tanks, helicopters and other Vietnam war vehicles up close. Each has an explanation of where and whom it was captured from. If you’re not so much into history you can still see the vehicles as you walk past the grounds.

To get out of the city and explore some nature, consider taking a half or full-day trip to Bach Ma National Park that lies about halfway between Hue and Da Nang, right where the border between North and South Vietnam used to be.

Bach Ma National Park is filled with hiking trails, waterfalls and even some campsites. French settlers that were well off used to live here but nowadays both tourists and locals alike explore its natural beauty.

The Perfume River runs through the middle of Hue and can be a relaxing break from city life. Boat tours are available where you can jump off and explore the banks of the Perfume and other areas of Hue. Or simply take a walk along the river at night to find little shops with lanterns lit that weren’t open during the day.

You can get a good overview of the city in one afternoon if you happen to be visiting on a Saturday or Sunday. Getting to see a city from a locals perspective is always the best way to experience a new place.

Just outside of Hue you can step into the grim past by witnessing Ho Quyen, an old tiger fighting arena that is thankfully no longer in use. Tigers here used to be drugged and have their claws taken out before being put into the arena to fight against elephants, which represented the monarchy.

The tigers were a symbol of rebellion and the act of having them fight and be taken down by the elephants showed spectators that rebellion would not be tolerated.

Alternative Things to do in Hue

There are a few things that you will absolutely need while in Vietnam.

Reef Safe Sunscreen: Yes, Vietnam has coral and yes, you should be wearing coral safe sunscreen. I’m not here to lecture you on saving the earth and plants, you know that already. This is just a friendly reminder that you can keep you and the waters safe.

Adapter: Obvi. But seriously people always forget. I like to use a universal adapter so if you don’t have one already get one stat and never worry about it again!

Reusable Water Bottle: This is an essential for ANY trip but even more important for Vietnam because recycling here is not really a thing and when you see the plastic littering this beautiful country you’ll be sad that you’re contributing to the plastic issue. There are lots of places to fill up water bottles.

Mosquito Repelling Bracelets: These are a thing? Totally! Mosquitoes can get nasty in Vietnam and unfortunately can carry diseases. This is the healthiest option because they don’t use deet!

Activated Charcoal: When your tummy is not feeling so great and you may need to run to the bathroom at any second you’ll be happy this is within arms reach. Food issues happen in Southeast Asia and these will help you get back to health and enjoying your vacay in no time.

Travel Insurance: Just don’t travel without it, end of story. But if you need more convincing read this.

You know what to see in Hue, it’s time to book your accommodation and get to this incredible and historic city to witness a piece of the past.