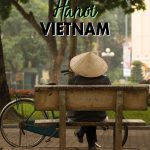 Hanoi is the capital of Vietnam and is home to chaos, beautiful architecture and mouth-watering food. In this busy city you’ll find the streets filled with food stalls, a ridiculous amount of motorbikes somehow riding in sync, a look into the country’s history and art.

It is considered a must stop and is one of the most popular cities to visit in southeast Asia. Hanoi also acts as an ideal jumping off spot for many attractions worth visiting like the UNESCO World Heritage site of Halong Bay, Sapa for trekking and Ninh Binh which is described as Halong Bay on land.

Love it or hate, Hanoi is a city that needs to be visited to understand the country’s influence from the Chinese, French and Americans who all invaded the country at one point and left this unusual yet addictive culture. I share what to see in Hanoi and the best things to do in Hanoi to help create your Vietnam itinerary.

There are a few things that you will absolutely need while in Vietnam.

Reef Safe Sunscreen: Yes, Vietnam has coral and yes, you should be wearing coral safe sunscreen. I’m not here to lecture you on saving the earth and plants, you know that already. This is just a friendly reminder that you can keep you and the waters safe.

Adapter: Obvi. But seriously people always forget. I like to use a universal adapter so if you don’t have one already get one stat and never worry about it again!

Reusable Water Bottle: This is an essential for ANY trip but even more important for Vietnam because recycling here is not really a thing and when you see the plastic littering this beautiful country you’ll be sad that you’re contributing to the plastic issue. There are lots of places to fill up water bottles.

Mosquito Repelling Bracelets: These are a thing? Totally! Mosquitoes can get nasty in Vietnam and unfortunately can carry diseases. This is the healthiest option because they don’t use deet!

Activated Charcoal: When your tummy is not feeling so great and you may need to run to the bathroom at any second you’ll be happy this is within arms reach. Food issues happen in Southeast Asia and these will help you get back to health and enjoying your vacay in no time.

Travel Insurance: Just don’t travel without it, end of story. But if you need more convincing read this.

Things to do in Hanoi

Hanoi’s Old Quarter is first on this list for a reason, it is easily one of the top things to do in Hanoi. Though it is one of the most popular attractions in Hanoi it is the perfect place to witness local life in Hanoi. Take a few hours to stroll the 2000-year-old chaotic streets of the Old Quarter, trying new foods from the street stalls and picking up some souvenirs. Not to mention you can marvel at the decaying yet mesmerizing French architecture.

Built in 1070, the Temple of Literature was Vietnam’s first national university and was dedicated to Confucius. Today it is a beautiful park made up of 5 courtyards which you can visit to see the remains of one of the oldest structures in the country.

Ho Chi Minh was the much-loved leader of Vietnam who was the first communist leader of the country. Today the mausoleum is his final resting place where you can see his embalmed body in a glass case and is one of the most visited Hanoi attractions. The mausoleum was modeled after Lenin’s Mausoleum in Moscow. What’s interesting yet sad is that this mausoleum was created against his will as Ho Chi Minh wished to be cremated. Minutes away is the Presidential Palace and Ho Chi Minh’s House on Stilts.

One Pillar Pagoda is regarded as one of Vietnam’s most iconic temples. It was built in 1049 and is on stilts over a lake, designed to look like a lotus blossoming on a single pillar.

Hoan Kiem Lake is a popular spot for locals and is one of the most scenic places to visit in Hanoi. Get here early in the morning to watch locals go about their daily routines like practicing Tai Chi. In the middle of the lake is Tortoise Pagoda, built because of the giant turtles that live in the lake. Ngoc Son Temple is on Jade Island on the lake and is a beautiful place to watch the sunset. It is accessed by one of the iconic bridges and is one of the best things to do in Hanoi.

Quan Su Temple is the headquarters for the Central Buddhist Congregation and is one of the most important temples in the country. It is not one of the largest or most visited so it is a little off the beaten path for many visitors but is worth visiting for its importance to the locals.

Built by French colonialists between 1901 and 1911, the Hanoi Opera House now stands as a gorgeous example of French architecture in the centre of Hanoi in the French Quarter. It is still used to this day where Vietnamese dance, opera and musical performances are held.

One of the not-so-popular Hanoi tourist attractions, this museum is fascinating because it focuses solely on women in Vietnam and is worth a visit It showcases propaganda posters, costumes, and fabrics from tribes. But more importantly, it shows the role of women in Vietnamese culture and society and their efforts during the war.

Also known as the Hanoi Citadel, it was acknowledged as a UNESCO World Heritage site in 2010. It was once the centre of Hanoi and on the site many artifacts were found that showed ancient roads, ponds and wells from as early as the 6th century.

Every major city in southeast Asia has a market and Xuan Market is Hanoi’s largest and oldest making it one of the top things to see in Hanoi. You’ll find everything here in the four-storey building that it is found in from fish on the first floor to souvenirs, knock offs and clothing.

Hoa Lo Prison was used for political prisoners of the French colonists. During the Vietnamese war it was nicknamed Hanoi Hilton when US prisoners were held there. Today it is a small museum that still has the original guillotine.

Where to Stay in Hanoi

Check out the detailed guide on where to stay in Hanoi for all budgets.