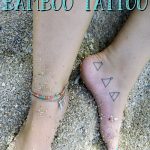 So you’re heading to SE Asia and want to get a Thailand bamboo tattoo? You’re not alone. And luckily you’ll have plenty of options as bamboo tattoos have spiked in popularity in recent years, especially amongst those traveling through SE Asia.

Whether it’s on your bucket list or you decide spur of the moment to get one, there are definitely a few questions you’re probably wondering or should be asking before you get a bamboo tattoo.

But first, a little bit of background on the bamboo tattoo tradition. The most common country to get a bamboo tattoo is in Thailand, where you can find traditional Sak Yant (even Angelina Jolie has one) tattoos on many people done by both tattoo artists and monks. The art of bamboo tattoos goes back 3000 years to the Khmer period where monks would have religious texts tattooed on them for protection. Soldiers would also go to temples to get tattooed for protection, strength, and invisibility.

Whether you want to be tattooed by a monk or in a tattoo shop, you should always make sure it’s safe and clean.

Is a Bamboo Tattoo Safe?

Most people think of SE Asia and think that getting a tattoo there would be an awful idea because of health standards. This is absolutely not the case. In fact I have seen shops in Thailand that are cleaner than those in Canada. The same risks apply for machine tattoos as bamboo tattoos. You still need a clean needle and razor, the area must be cleaned properly and the tattoo must be taken care of.

As long as you find a shop that uses clean products and takes care then you are fine. As for getting tattooed by a monk…I have heard that they often reuse needles as they are blessed. I am not positive on this though and highly recommend looking further into it before you decide.

The big debate: bamboo tattoo vs machine. Which one hurts more? The most common answer is that yes, it hurts less. Personally I found mine hurt more but this was probably because it was done on my foot which is a more painful area than where I have gotten my other tattoos.

That being said, some say that it hurts too much so they switch to a machine during the tattooing process. It’s all based on personal experience. Luckily bamboo tattoos give you more of a break. They take longer to do but because they need to consistently put more ink on the needle means that you get quite a few breathers!

How Long do Bamboo Tattoos Take to Heal?

Not long at all! With machine tattoos it can often takes weeks before you can fully submerge it in water, you have to moisturize it daily and wear a bandage on it for the first day or so. Bamboo tattoo aftercare is easy! With bamboo tattoos you can simply walk away when it’s done with only a small tube of cream in hand. I had a shower an hour after I got mine and went swimming in the ocean the next day!

How do I Pick Where to Get it Done?

Do your research. Find an artist who does pieces that you like. Find a shop that uses clean practices, and take recommendations seriously. I found a great shop just by reading reviews on TripAdvisor. When I read that was same shop was mentioned many times I went straight over. Compare prices, the most expensive doesn’t mean it will be the best or the cleanest. And don’t expect them to come cheap just because you’re in SE Asia, it is a skill and it takes time.

If you’re in Koh Phangan I recommend Freeway. I got mine done by Tip and he was awesome. The work around the shop shows just how much he can do, which is almost anything you could want. Or if you’re on Koh Tao head to B Bamboo Tattoo, which was recommended to me by a friend who had a beautiful tattoo done there.

How Expensive are Bamboo Tattoos?

That all depends on where you get it done. Some tattoo artists will be in higher demand and charge more. Some places just charge more because they think can they rip off tourists. Like I said before, do you research, ask around, look at a couple of shops before you decide. To give you a rough idea mine cost 2000 baht ($57 USD) and took about half an hour to do.

All tattoos fade, machine or bamboo. It has been said that bamboo tattoos fade faster though. This makes sense as the needle doesn’t get the ink as far into the skin as a machine tattoo.

Just talk to people, so many people have them done in Thailand you’ll find someone who can recommend a good place! And speaking of recommendations here’s one for getting a Sat Yank tattoo in Bangkok.

Other posts on Thailand:

What would you get done for a bamboo tattoo?