Not to be biased as a Canadian, but Canada really does have the best fall colours in the world. You can find your fill of reds, yellows, and oranges across the country in national and provincial parks, in stunning cottage country, along the coast, and on legendary road trips. From the mountains in Banff National Park, to the shores of New Brunswick, and around the lakes in Ontario, you have quite a few options when it comes to visiting Canada in the fall.

When is the best time for fall foliage in Canada?

The best time to visit Canada for fall colours is mid-September until mid-October. It is important to note that each area may have slightly different timing, as Canada is a massive country, and the colours changing are, of course, all weather dependent. Leaves may start turning earlier if September is cooler, and it’s not uncommon for the leaves to stay bright until late October. Many parks and areas across Canada monitor the changing colours and will keep you updated on their sites so you don’t miss them.

Canada in Autumn: Where To Go

These are the top places in Canada for those dramatic colours.

The Rocky Mountains are best visited during the fall, not only for the fall colours that decorate the mountains, but also because there are fewer crowds, and the weather is spectacular for outdoor adventures. Both Banff National Park and Jasper National Park are worthy of your time when you visit Alberta in the fall and I promise that the drive between the two parks on the famous Icefields Parkway has plenty of pretty stops for photo ops. In Banff, try hiking the Larch Valley Trail or Tunnel Mountain for truly epic views of the fall foliage.

As one of the best provincial parks in Ontario, Algonquin really steals the show when it comes to fall colours in Ontario, but they’re so impressive that this provincial park showcases some of the best fall foliage in all of Canada. Algonquin Park is a 3-hour drive from either Ottawa or Toronto which makes it an ideal day trip for those who want to come up for one of the day hikes that are anywhere from 1km to 12km. But if you prefer to spend more time in this scenic park, there are plenty of camping options available. Just make sure that you book in advance as they fill up quickly. And the same goes for parking, getting to the trails earlier is best. You’ll be hard-pressed to find a space after 11AM. Some of the best trails in Algonquin for fall colours are The Lookout, Barron Canyon, and Centennial Ridges.

Get your car ready, this is one road trip that you’re not going to want to miss. The Cabot Trail, which runs along the north end of Cape Breton, has been named one of the most beautiful drives in the world, and for good reason. This 298km drive will take you through Cape Breton Highlands National Park, along the coast, and through valleys with picturesque views of the Atlantic Ocean. Even if you don’t catch the fall colours here, the drive is truly mesmerizing and has lots of stops for activities including hiking, kayaking, whale watching, and more. 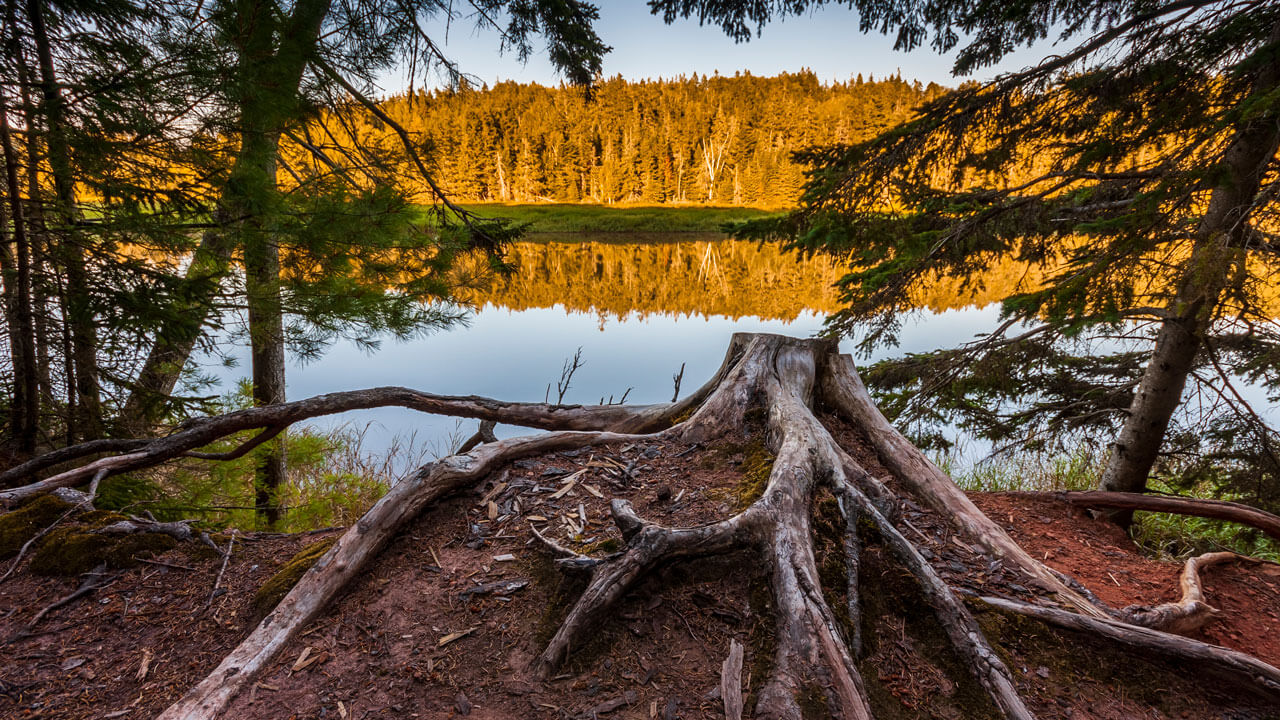 Canada’s smallest province is where you can catch the deep reds, vibrant yellows, and warm oranges for the longest period. Since the climate here is warmer, the colours stick around for longer and make PEI an excellent destination to bask in the fall colours. Confederation Trail, which is a network of 449 kilometres of trails, covers the entire island and is the hot spot for being among the falling leaves. 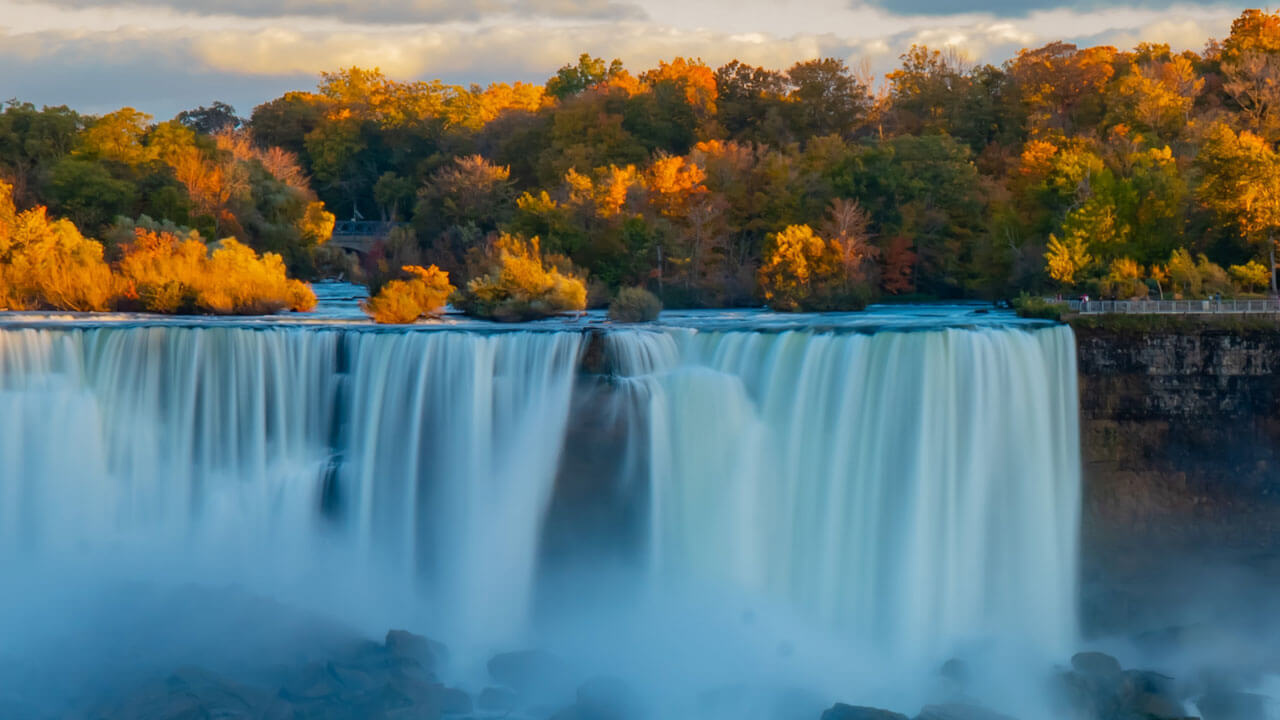 Encompassing both Niagara Falls and Niagara-on-the-Lake, plus the surrounding areas, the Niagara region is a true treat for your eyes. And your taste buds will love that you can see some spectacular fall foliage while sipping on wine in one of Canada’s best wine regions (that is also known for ice wine!) in Niagara-on-the-Lake. Around the mighty Niagara Falls you can spot lots of colours too. Try viewing them from above on a helicopter ride, while dining at the SkyTower, or while riding the Sky Wheel. For hiking opportunities, make your way over to Balls Falls Conservation Area where there are multiple short hikes to waterfalls. Lastly, don’t miss the opportunity to drive down the Niagara Parkway along the Niagara River for some of the best views.

Another incredibly scenic drive in Canada, the Fundy Coastal Drive will take you along the wild Bay of Fundy in southern New Brunswick. Stretching for 460 km, you’ll get to take in views not just of the fall foliage but also the rugged coastline with stops at picturesque small towns, lighthouses, and Fundy National Park. Try hiking some of the trails here but don’t miss out on the real show stopper: Hopewell Rocks, where you can watch the tide change drastically in mere hours. This is because it’s where you’ll find the world’s highest tides.

Make your way over to the Laurentian Mountains from late September to mid-October (or late October if you’re lucky) to be surrounded by the colours of the abundant sugar maple trees. For hikers, you have quite a few choices for trails in the area. Try the Doncaster River Loop or  L’Envol Trail for scenic views of the vibrant trees from above. But perhaps a more relaxing weekend is your style. If so, head over to Mont Tremblant, which is well-known as a ski resort, but can be visited year-round. Mont Tremblant is less than 2 hours from Montreal.

Bruce Peninsula is nestled along the coast of Georgian Bay, which is known for having bright blue waters. This, mixed with the changing colours of the leaves, make for breathtaking scenery. Hiking is widely available in this area through one of the best national parks in Ontario, Bruce Peninsula National Park, but you’re definitely going to want to make your way up the 65-foot observation tower that showcases the best panoramic views in the fall in the town of Tobermory.

A personal favourite of mine is Gatineau Park, just on the opposite side of the river from Ottawa. This park is frequently visited, especially during the fall, because of its easy accessibility, but it’s quite large and has numerous trails with viewpoints over lakes and rolling hills. Hiking and cycling are both extremely popular in Gatineau Park and you can even spot wildlife. One of the best trails to spot fall foliage is Pink Lake (one of my all time favourite hikes), which is a short and sweet loop that is quite busy, so head here early. King Mountain Trail is epic for lookouts, and Luskville Falls is a top choice too for those who want a steeper incline. 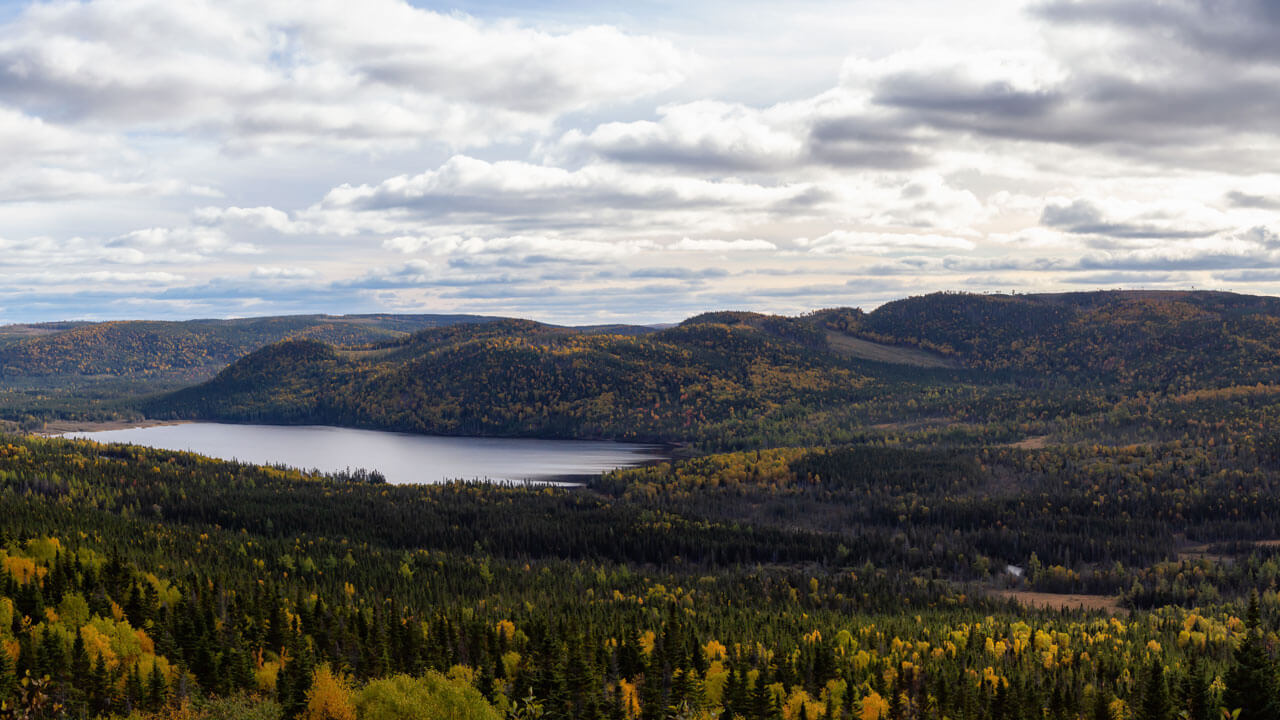 On the western side of Newfoundland, you’ll find one of Canada’s true natural gems: Gros Morne National Park. This park has a diverse landscape that make it one of the most unique national parks in Canada. The Tablelands are where you can walk on the Earth’s mantel (you know the part that’s supposed to be below the surface), but you can also cruise by fjords, and hike to towering mountaintops. Like much of Canada, Gros Morne is no exception to beauty in the autumn. During the first weekend of October, you can visit for the Gros Morne Fall Festival and create your own artwork inspired by the vivid colours of the park.

Last but certainly not least, Agawa Canyon is a bit of a different experience than all the rest. While hiking is possible here, it’s most common to take a train trip from Sault Ste. Marie to the canyon itself where you can kick back and be entertained by the onboard commentary as you make your way to the astounding Agawa Canyon. This day trip will take you past all of the Canadian scenery that you’d expect; forests, lakes, and rivers for a family-friendly outing at one of the best times of the year in Canada.