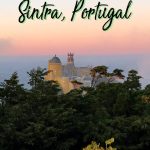 If you’re going to visit Portugal then you need to visit Sintra. The colourful palaces are unlike anywhere else and roaming through the hills of the national park, through the gardens and around the palaces will have you feeling like you’re walking through a real-life fairytale.

Get your camera ready because with these things to do in Sintra you’re going to have a whole lot of pictures for Instagram.

The majestic beauty of this region was once reserved for the royals who came here to beat the Lisbon heat but now you can feel like a royal too, exploring the grounds where kings and queens once walked. All you have to do is decide what to do in Sintra for a magical time among the top Sintra sights.

How to Get to Sintra

Getting to Sintra from Lisbon is an easy day trip option with multiple ways to get to Sintra for all budgets.

The best way to maximize your time if you only have a day is to rent a car. This way you can also explore some of the further off Sintra attractions and make stops on your way to Sintra.

The most popular option is booking a Sintra tour from Lisbon. Most include stops at the top highlights going to Sintra such as Cabo da Roca and Cascais. Every Sintra tour will take you to Pena Palace, the must-see palace of the region.

Book a Day Trip to Sintra!

Travel time is 40 minutes each way and you can find up to date timetables on the official CP (Comboios de Portugal) site.

Be sure to take the train as early as possible to get ahead of tour groups and to avoid line-ups buying tickets at Rossio station.

Those taking the train into Sintra can either opt to walk to all of the attractions, to catch a bus or to hire a tuk-tuk. Another option is to do a tour once in Sintra. Tuk-tuks and tour guides will be waiting outside of the station.

The Sintra train station is 1.5km outside of the historical town and it’s an easy walk but getting to attractions such as Pena Palace and the Castle of the Moors are steep walks. Walking is possible but you will see fewer attractions as it takes more time.

The 434 bus is a tourist bus that makes a loop every hour from the Sintra train station to the historical centre and then to the attractions in the hills.

Another option is to catch the hop-on-hop-off bus that goes directly to the major tourist sites.

Things to do in Sintra

The star attraction of Sintra is, of course, Pena Palace (many think it’s called Sintra Castle), the summer residence of royals that was built in 1838 by King Ferdinand I.

The colourful palace looks like something from out of a Disney movie where princesses would frolic around and which you can now do today. Just picture yourself twirling in front of the mythical statues and on the brightly painted terraces that overlook the kingdom.

The architecture is a mix of many styles, some of which include Renaissance and Moorish and the palace was actually built upon the ruins of an old monastery.

The best views of the castle are from the outside and the surrounding views of the area are absolutely gorgeous (hello new Instagram pics!) but if you step inside you’ll be treated to amazing stucco work and paintings.

Pena Palace is more than just the palace so be sure to give yourself ample time to explore the surrounding gardens.

Exotic trees and plants were planted over 200 hectares of land, created by King Ferdinand II who wanted the paths weaving through the greenery to be a maze of romantic walks.

In the park you’ll find the highest peaks in the Serra De Sintra with the best view being at Cruz Alta, a stone cross made in a Manueline style. It’s easily one of the best things to do in Sintra. Here you’ll be rewarded with views of Pena Palace and the surrounding hills.

On a clear day you can see as far as Lisbon but I highly recommend timing your visit here for sunset.

The fairytale lands don’t stop at Pena Palace, Quinta da Regaleira was built by a very rich man who created his dream residence that you can explore today. It’s one of the top Sintra sightseeing spots.

Built in the Manueline style the 5-story building has Gothic features on the outside with gargoyles and more intricate details.

While the residence itself is impressive the real draw to this property are the underground tunnels that were designed to confuse those exploring for fun.

Deep grottos and wells along with other romantic architecture are throughout the gardens. There are references to the Knights Templar and dark alchemy, some spots were even designed with spiral staircases where tarot card readings were held.

Castle of the Moors

The Castle of the Moors is very popular to visit in Sintra for its high vantage point over Sintra. The ruins were originally built in the 9th century by North African Moors to defend Sintra. It was restored by King Ferdinand II in the 19th century after it fell into disrepair.

Today the Castle of the Moors is a welcomed addition to the Serra De Sintra landscape and provides a stark contrast to the romantic buildings throughout the region.

Monserrate Palace is a hidden gem in Sintra where you can go to escape any crowds. It’s 3.5km outside of Sintra’s centre but that doesn’t mean that you shouldn’t pass it. This palace like the Castle of the Moors has an obvious contrast to the architecture of other palaces.

The palace was actually the idea of an Englishman, built in the 1860’s as his summer palace. But he didn’t just design the palace, the gardens must be explored too as you’ll see a waterfall, a Mexican garden and even a ruined chapel.

To experience history at its finest, visit the Palace of Sintra. It’s is the best-preserved medieval palace in all of Portugal and the architecture is an interesting mix of all of the residents who lived here.

Royalty occupied this palace during the 1400’s to the 1700’s, each of them adding their own flair or more space to the place. The most obvious look of the palace are the two white chimneys that are very distinctive which have become a well-known symbol for Sintra.

Sintra’s beautiful surroundings are an ideal place for some yoga as the serene setting and nature welcome in visitors who need and want a bit of time to relax.

Think about spending a couple of days to add onto your Portugal itinerary or visit for a week!

Hop on a tuk-tuk for a short drive and you’ll be brought to the 16th-century monastery where Franciscan monks lived.

In order to have the least amount of impact on the surrounding nature the monastery was built to be extremely simple with tiny cells carved from the rock, including the beds.

The location in the Serra De Sintra allowed the monks to be completely separate from the outside world where they could practice their meditation.

If you want to visit somewhere in Sintra that’s off the beaten path then this is the place for you.

Just in case you get tired of exploring palaces and pretending to be a princess then you can take a break by visiting one of Sintra’s beaches.

Both Praia da Adraga and Ursa are fabulous white sand beaches that aren’t as crowded as the ones by Lisbon, but there are smaller.

Rocks and cliffs surround the beaches creating a nice backdrop for your time in the sun.

You will need a car to reach these beaches.

A trip to Sintra should include roaming around the Old Centre but be sure to get out early before the crowds of day tours come in. Shops and pretty buildings, lots of restaurants and even some museums will greet you. Free walking tours of the town are available.

Palace of Queluz is actually in the city of Queluz, not Sintra, but it would make for a great stop if you are driving to Sintra. Palace of Queluz has exquisite Rococo architecture and was built in the 18th century as a summer home for Dom Pedro of Braganza.

The interior is impressive with many details of stucco work and frescos. The gardens don’t disappoint either, designed with a Baroque look by a French architect as the gardens were created later.

Now you that you know what to see in Sintra perhaps you think it’s worth staying at least a night.